Turkey Not Pardoned at Camp Greene 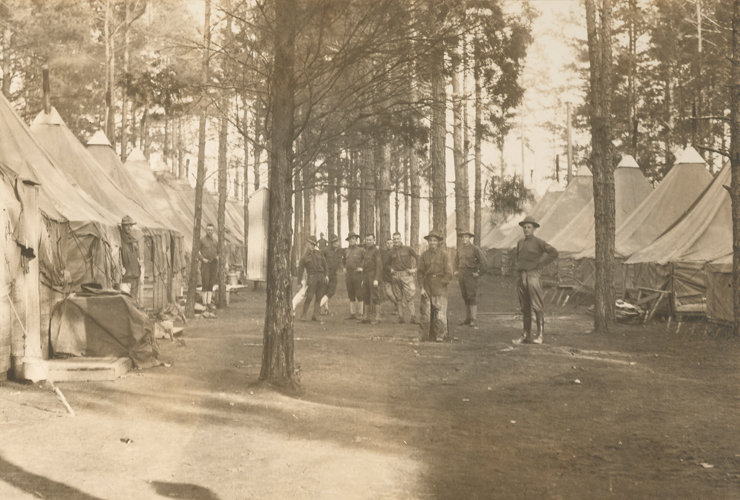 North Carolina’s longest-running World War I military installation was an infantry training camp called Camp Greene situated just outside of Charlotte. Tens of thousands of doughboys slated for overseas service cycled through the camp’s confines, learning drill, marksmanship, battlefield tactics, and military decorum. For many men, their stint in basic training was their first extended absence from home, family, and friends. To ease the inevitable feelings of homesickness and loneliness, military and civilian officials organized morale-boosting activities and attempted to restore to the men some semblance of regular life by observing national holidays with all the pomp and circumstance they would have found back home.

The Thanksgiving holiday of 1917 was no exception. Except for high-priority operations like guard duty, mess hall work, and police details, military commanders gave camp occupants the day off. A bout of bad weather threatened to dampen spirits, forcing the cancelation of all outdoor sports, but the YMCA would not be deterred and moved what events they could into the huts, offering movie screenings, concerts, and social gatherings. 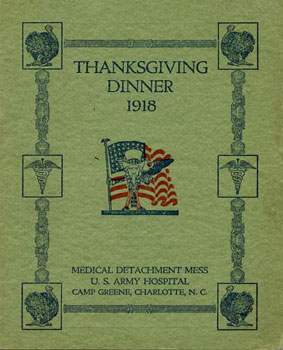 Dinner, however, was the highlight of the day, featuring all the hallmarks of the holiday meal they were missing back home. The first course consisted more or less of oyster soup, sweet pickles, olives, and celery. Sweet and Irish potatoes, turkey and dressing, cranberry sauce, and corn comprised the main course. If the men weren’t stuffed to the gills by the end of the first two courses, they could help themselves to an assortment of goodies for dessert: nuts, dried fruit, peach and apple pies, and three (three!) different kinds of cake (coconut, chocolate, and walnut). Cigars, cigarettes, and coffee rounded out the evening. Suffice it to say, the men ate like kings!

If you are interested in learning more about the history of Camp Greene, check out the Charlotte-Mecklenburg Library’s digital project “The Doughboys & Camp Greene.” You can find hundreds of photographs and other digitized items as well as short essays on the history of the camp.