Over the coming year, I will endeavor on behalf of the State Archives of North Carolina to write about unique, odd, interesting, or special archival materials documenting North Carolinians in World War I. One of the more important—yet overlooked—set of original WWI records is the histories of the various local and county American Red Cross chapters in the state. During the war, the North Carolina American Red Cross became one of the state’s largest war work and troop support organizations. 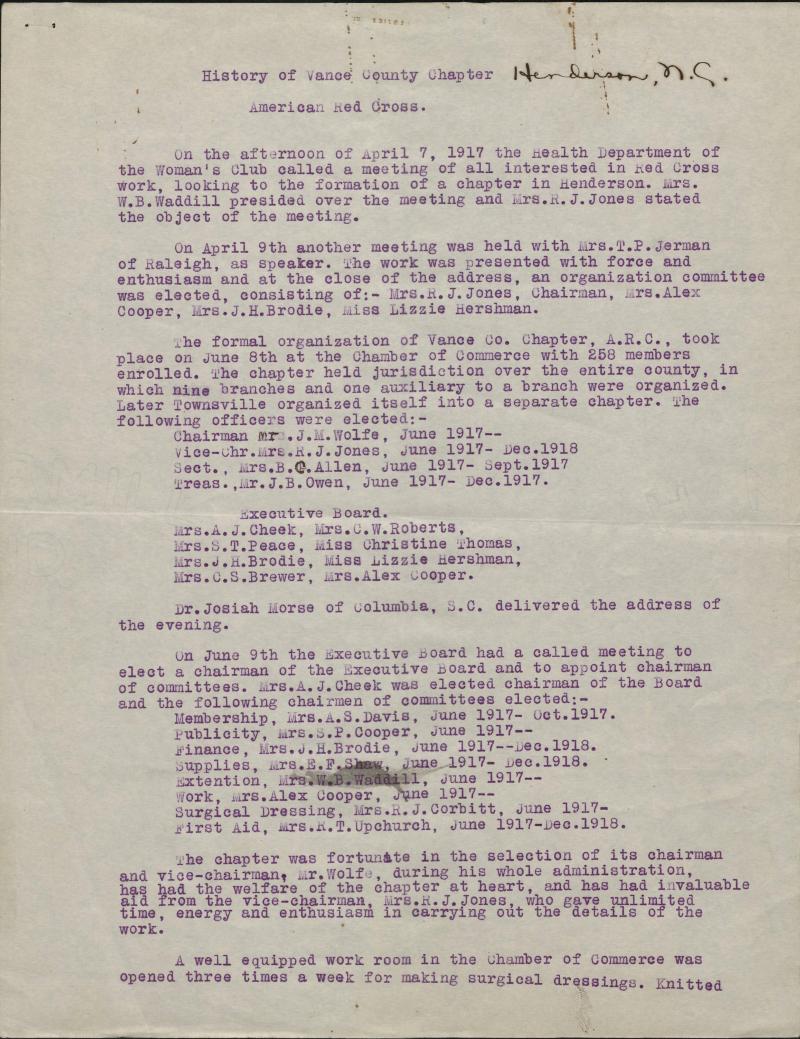 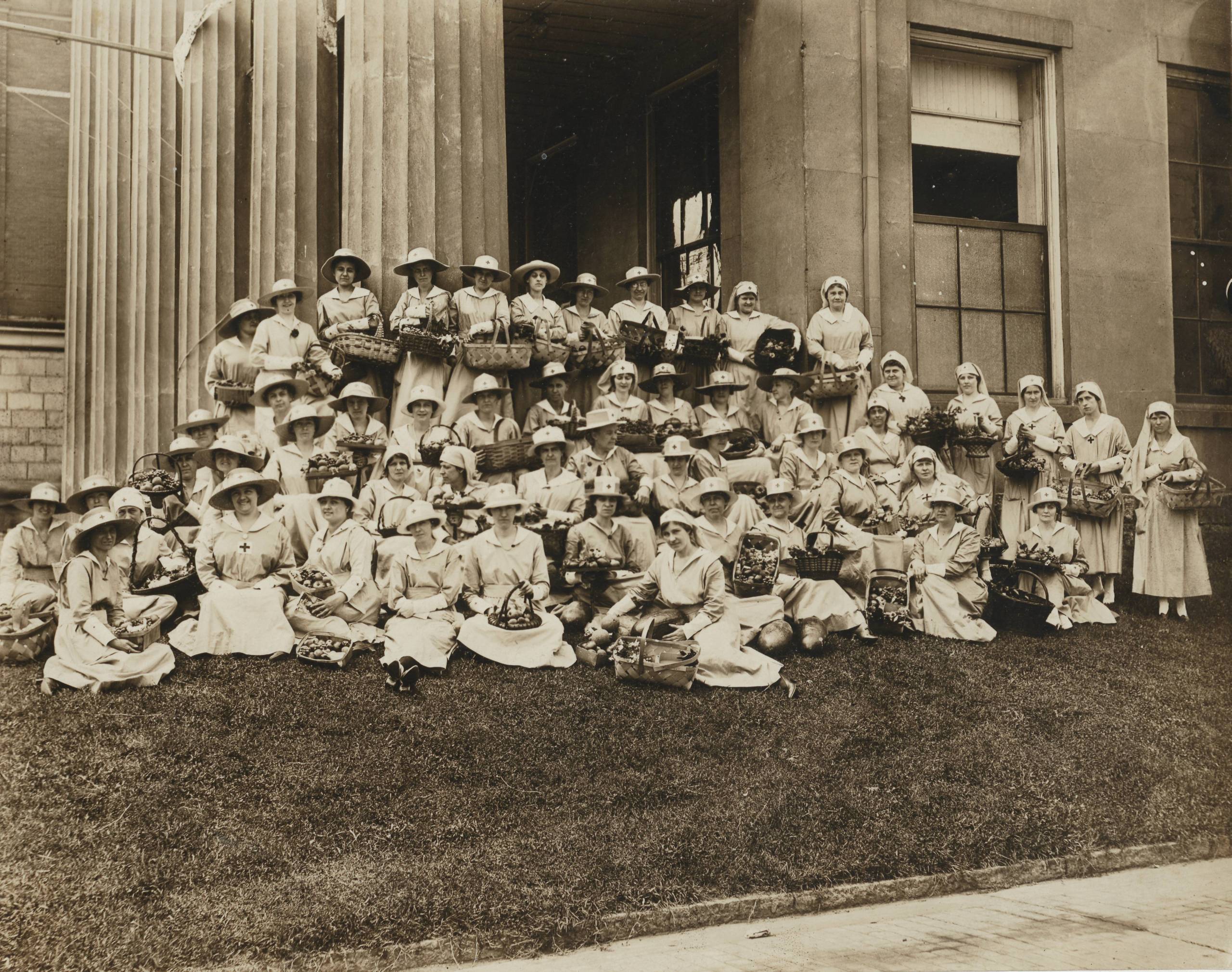 Acting under authority of a new 1919 law, the Historical Commission chose Robert B. House to be the Collector of World War Records, and House entered upon his work June 19, 1919. House tried to systemize the collection process and network of volunteer collectors around North Carolina. House and a part-time stenographer worked to copy information from original materials; label, classify, and identify original materials; and operate a continuous correspondence network with individuals throughout the state and with federal war-time government offices.

The records produced by county organizations and individuals in North Carolina were found to be in a chaotic state. In many cases, officials of various war-work organizations in the state had destroyed their records immediately upon the signing of the armistice ending World War I, under the impression that these records were of no further value. In many cases, they had kept no complete records during the course of the war. Many of the records from the North Carolina American Red Cross, YMCA, YWCA, and other organizations, not preserved in the Military Collection’s WWI Papers, or in collections of private individuals who were involved with organizations during World War I, no longer exist.

Robert House was specifically interested in working with the state and local Red Cross chapters, asking them to send specific organizational records to the Historical Commission—or at least original copies—when the organizations found no more active use for the materials. As few records or promises of records were received, House resorted to another means of at least preserving the stories of local Red Cross women’s roles in the home front war efforts. These histories were requested by the Historical Commission by early 1919, with little result apparently. In late 1919, House mailed a letter to all county Red Cross chapters, asking for their attention to the documentation of their own histories:

House wrote on November 25, 1919 (see full letter below): “It may not seem important to you to get this work done by people who are in possession of the facts in the case, but it is important and will become increasingly so as personal knowledge of the war fades. I am sure that you do not want your county misrepresented at all in an account of the Red Cross in North Carolina. . . . The war and its effects are not yet over. . . . How the Red Cross came to be in your community, what is now and what it continues to be, are matters vitally important to the history of these times.” 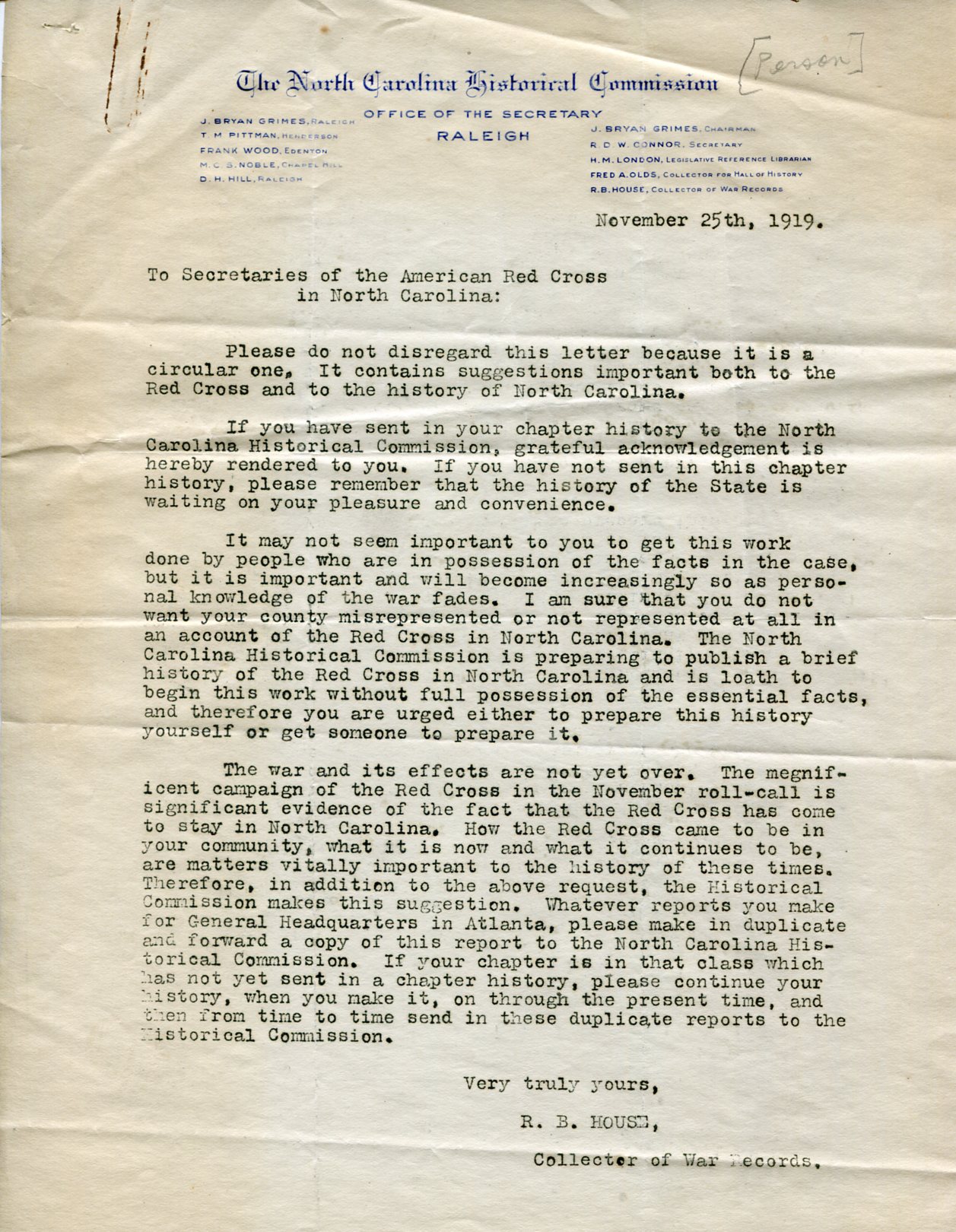 Early in 1919, the North Carolina Historical Commission also sent an outline of the format and information he suggested for local chapters to use when writing their histories. It was recommended that the histories be composed on plain white paper, typed, and include photographs and charts. The Historical Commission requested that each history include an introduction with a brief history of the formation of the Red Cross chapter, the names and offices of chapter officers and committee chairmen, the outline of the organization of the chapter and its committees, description of the work conducted by the chapter throughout the war period, and a conclusion of when and how the chapter ended its work. 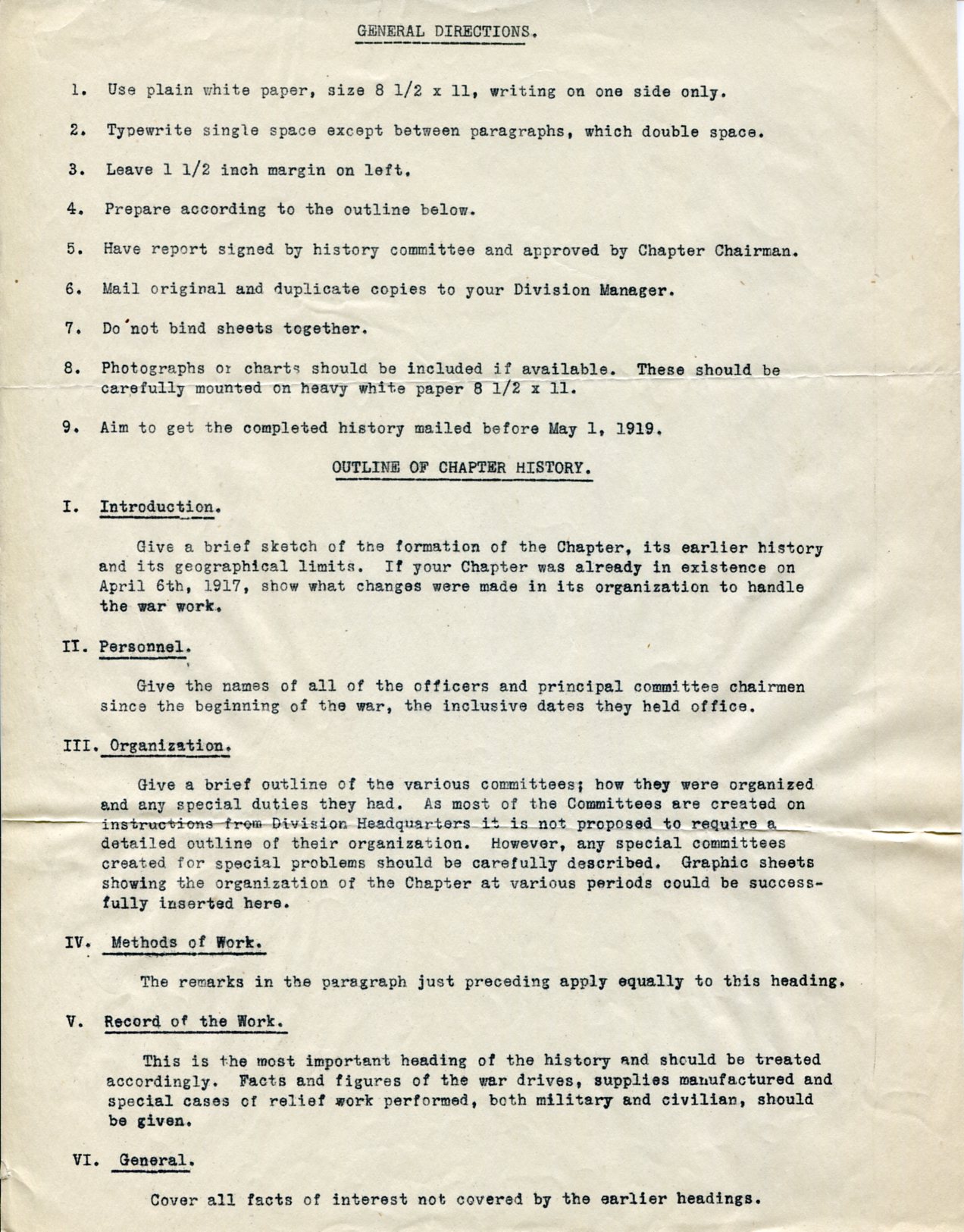 What the Red Cross chapters created was extremely varied. The majority of the chapter histories were typed, though there are a number that were handwritten. Some are lengthy, such as the Greensboro Red Cross chapter history, and some are simply one page long. A few include photographs; some histories have combined chapters into one county-wide report; and some created separate lists of black and white Red Cross workers in the counties.

One of the difficulties that the local chapters faced was the manner in which such local female-run organizations were managed in the early twentieth century. The Red Cross local chapters were all volunteer-led, often by the more prominent or wealthy women within a given community. Secretaries of the local chapters often were left in charge of keeping the minutes, meeting notes, and records for their Red Cross unit. However, depending on the individual’s personal struggles during WWI—including losing close family members in military service, keeping family businesses or farms in operation, or managing volunteer service and family life—Red Cross chapter secretaries often had little time to spend researching and composing a chapter history. 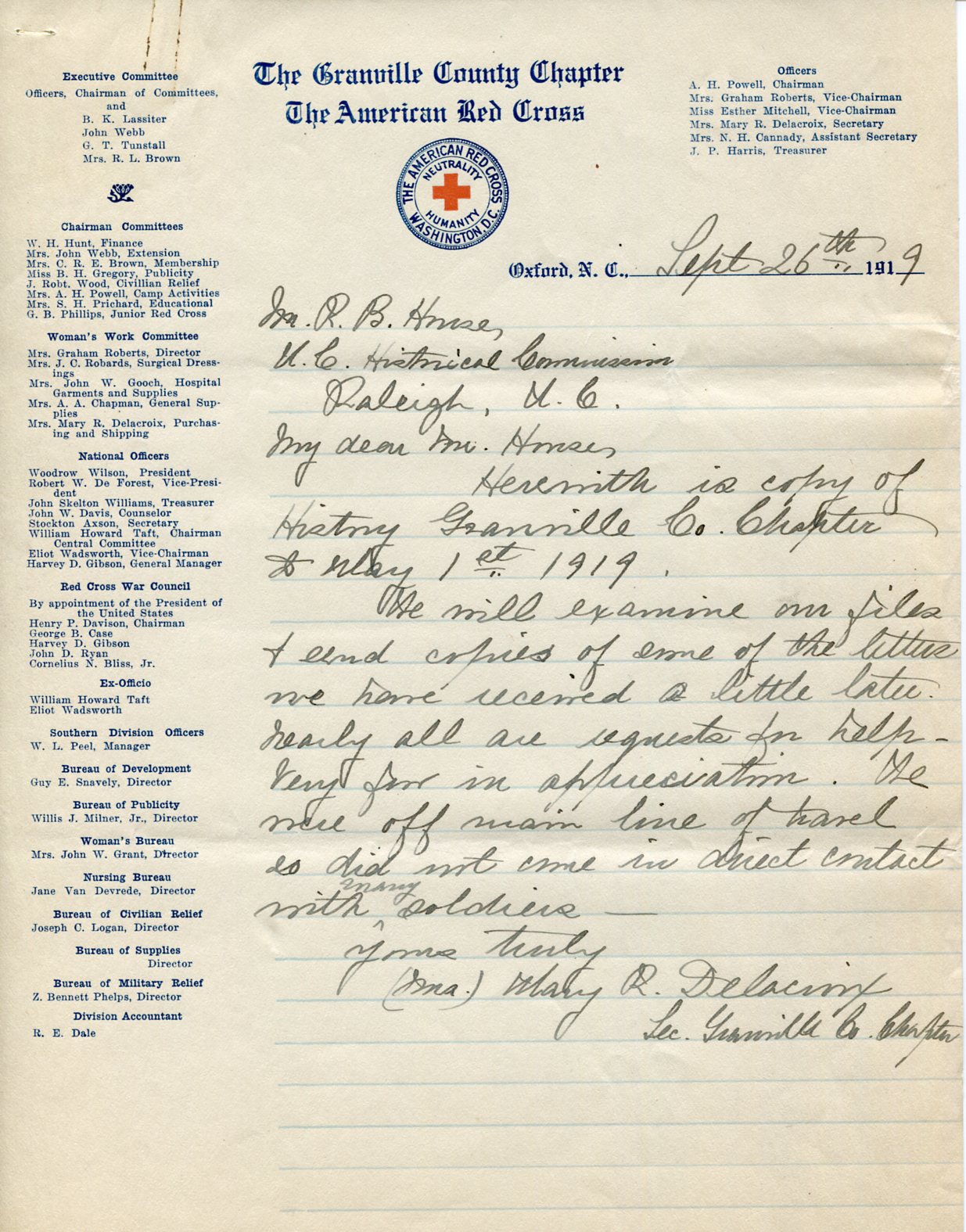 Chapter records were kept by the creators of those records, which could be committee members, chapter officers, or others. Therefore, an entire chapter’s history could be tied up in the home of a Red Cross volunteer who may have lost records, had some destroyed in a disaster (such as a fire or flooding), or was involved in bitter personal relationships with members of the chapter that kept them from cooperating with the whole chapter for such an effort as creating a chapter history. By the end of July 1919, the majority of North Carolina servicemen and female volunteers had returned from Europe. Many women in the state’s counties were working to help their returning loved ones reintegrate into a life that could include the veteran suffering from injuries or misunderstood war trauma. Single young women who had volunteered with the Red Cross were now marrying returning servicemen, having children, looking for new work, or moving. 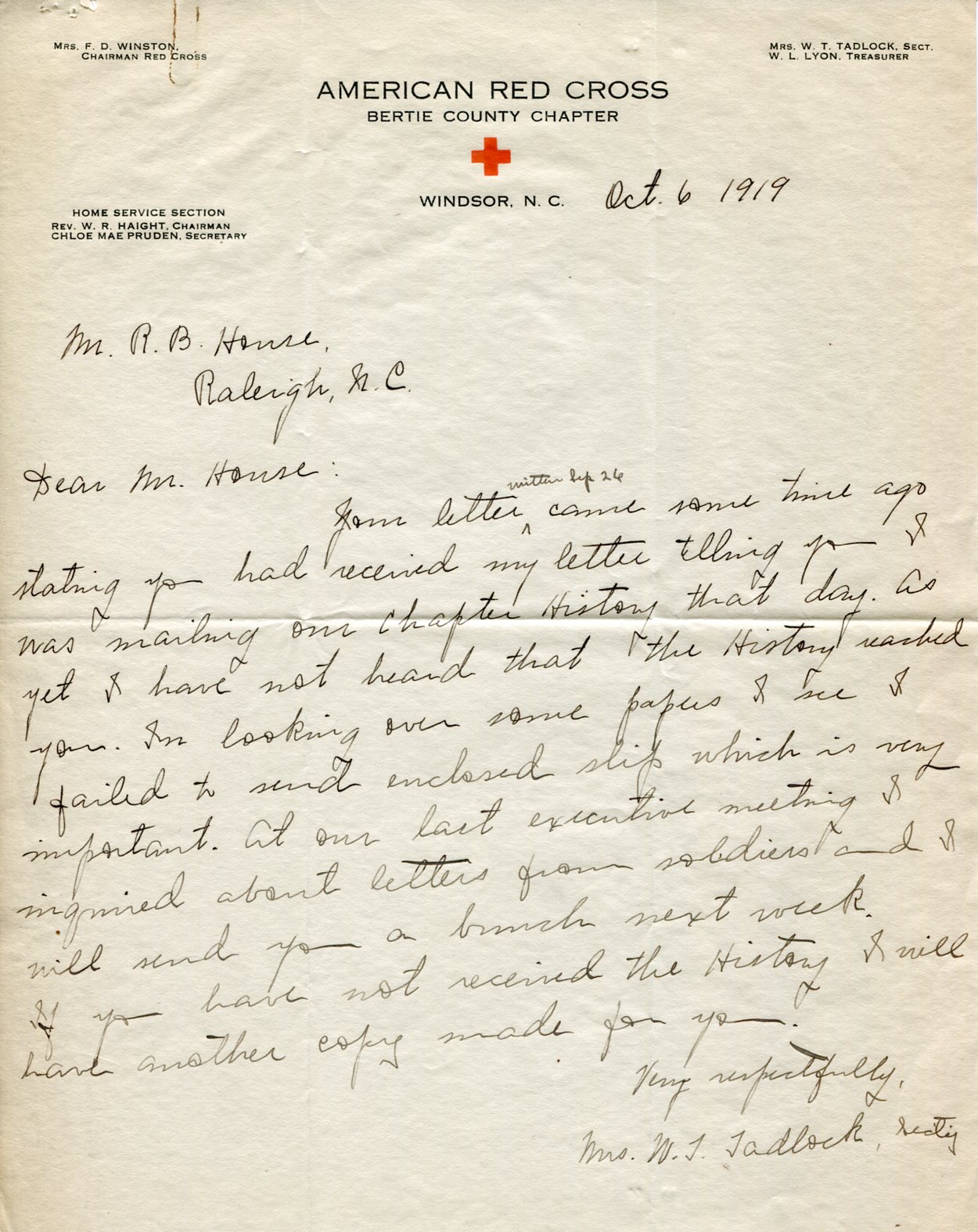 Robert House received numerous apologies from local Red Cross chapter presidents and secretaries for the delay in sending records and chapter histories. House also received notes with chapter histories citing the lack of available records to accurately and fully author a history of the chapters. What has survived documents the dedicated service of North Carolina women at home during WWI, answering a national call that women had not so experienced apart from the national suffrage and equal rights movements for women begun in the early-mid 1800s. 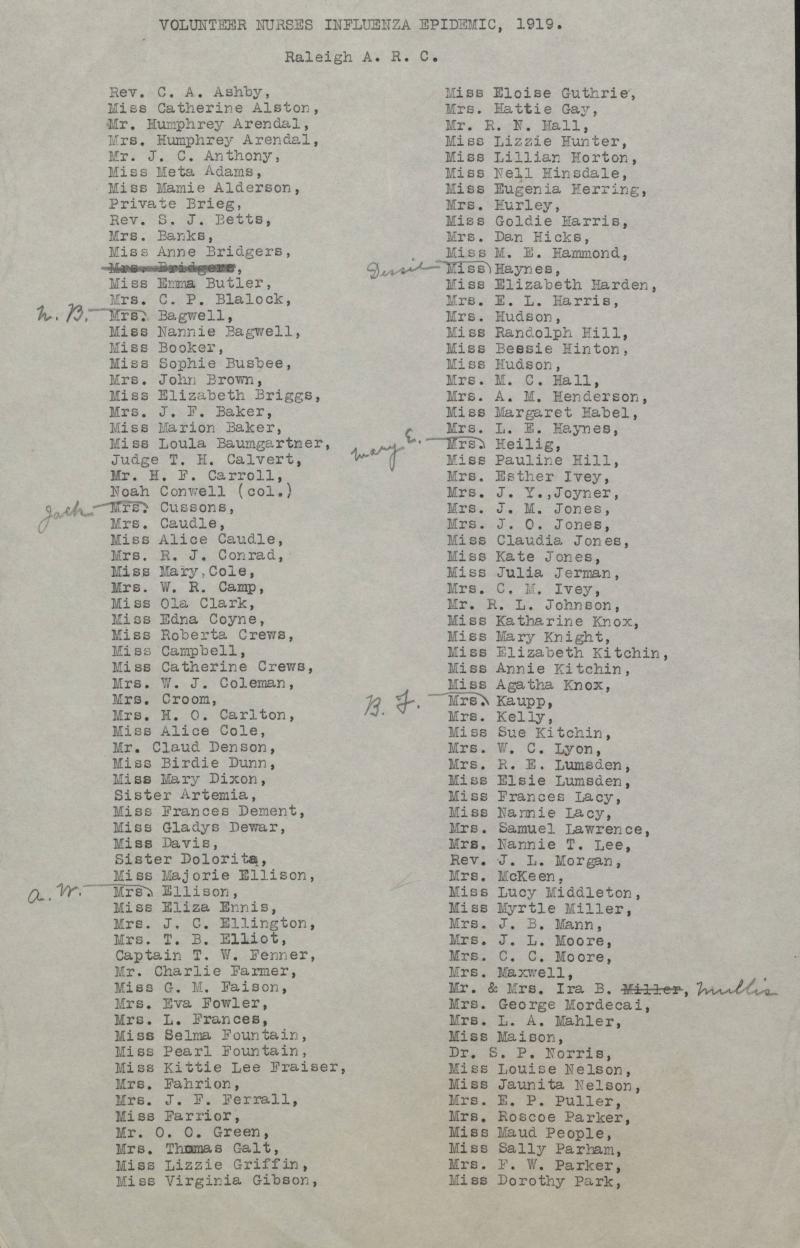 The Red Cross chapters in North Carolina offered women positions of respect as local leaders. They learned new skills (including the exposure to medical training that would open the door for numerous women to become nurses in a growing medical profession); found companionship and fellowship with other women suffering similar personal wartime hardships; and found a purpose outside of their families and homes that contributed to a burgeoning awakening of women’s expression of personal freedoms and rights. The chapter histories also show—though in a limited fashion—the role of black women in supporting the national war effort, a topic that is little known or understood in North Carolina for WWI.