The North Carolina Jewish War Service Roster is composed of a large, 10-sheet roster entitled “War Service Record of North Carolina,” compiled and published on September 15, 1919, by the American Jewish Committee Office of War Records (or Office of War Statistics) in New York City, N.Y. The compiled roster documents the names, addresses and home towns, birth place of their parents, military branches, military units, and military enlistment or draft dates, for Jewish North Carolinians who served in the different branches of the U.S. military during World War I. The roster is not a complete list, but was compiled from available public records and solicited military service record requests of Jewish families by the American Jewish Committee. 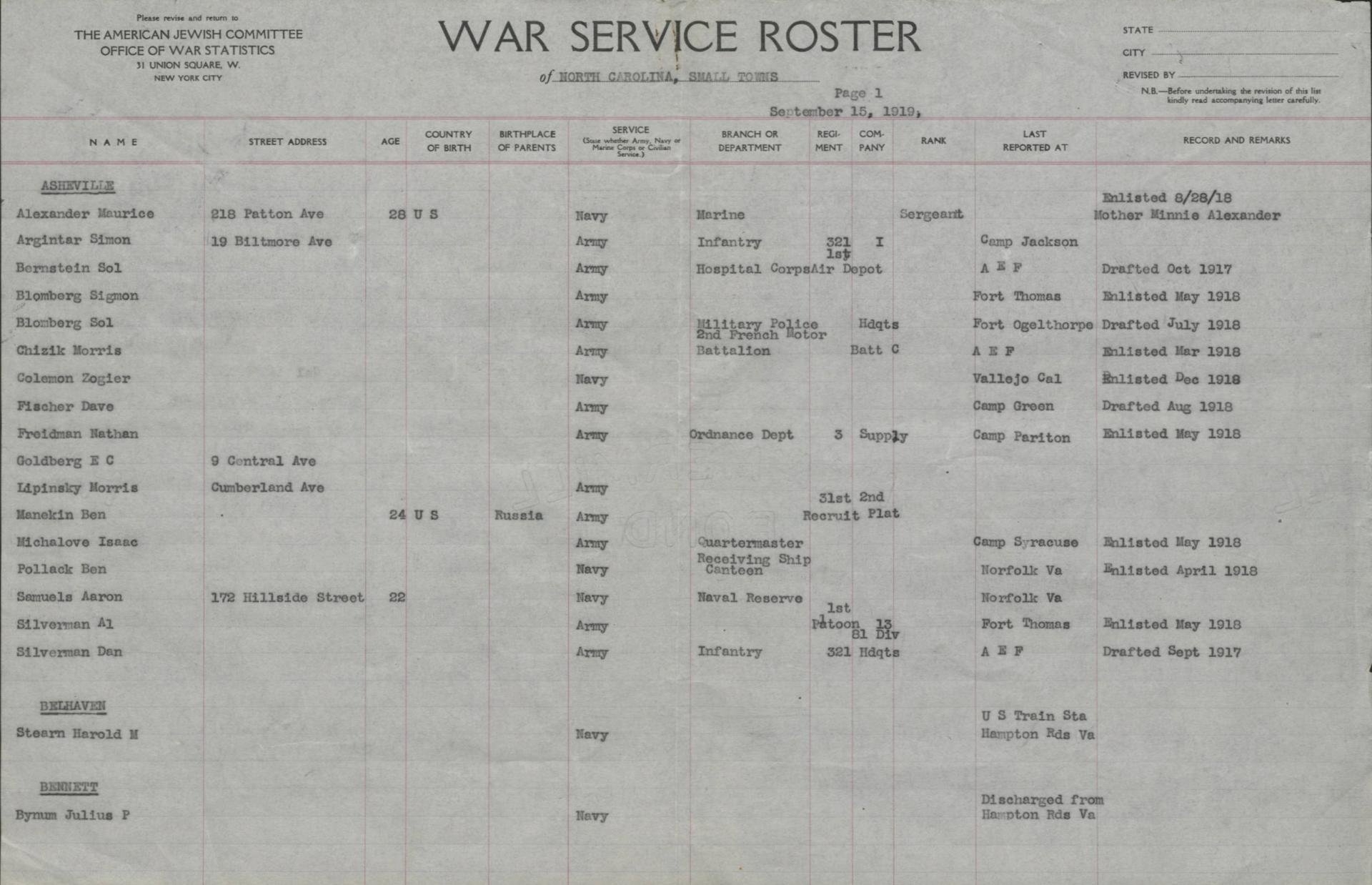 History of the American Jewish Committee Office of War Records

The U.S. Congress declared war on Germany on April 6, 1917. At the 11th Annual Meeting of the American Jewish Committee (AJC) on November 11, 1917—the first held after the declaration of war—members discussed “The matter of collecting complete and accurate statistics of Jews in the military and naval service of the United States…” and resolved that “...the Bureau of Statistics be directed to make every effort to secure data of this character.” The longstanding concern of Jewish leadership to document and publicize the patriotic contribution of Jews in military service to the United States had resulted in several studies of Jewish participation in past wars, including the American Revolution and the U.S. Civil War. The AJC’s project was intended to document Jewish participation in the U.S. armed forces contemporaneously with American participation in WWI.

At the 12th Annual Meeting of the AJC on November 10, 1918, the Executive Committee of the AJC reported that during its meeting on December 9, 1917, it had directed the AJC’s Bureau of Statistics to undertake the task of the wartime data collection. The Committee authorized the Bureau of Statistics to open an office in Washington, D.C., to gather information directly from federal records, appointing Julian Leavitt as its director. With the war underway, government offices had little time to spare, and the Bureau’s Washington office closed in June of 1918, as it was unable to gain access to active military service records. Since military records did not contain religious affiliation, the Washington liaison had been undertaken only to gather service details of individuals. They created the Office of Jewish War Records, which was also called the Office of War Statistics.

In order to identify Jews serving in the U.S. military, the Bureau turned to Jewish organizations for assistance. The Executive Committee’s report mentioned rabbis, national Jewish organizations, and the Jewish Welfare Board (JWB) (founded in 1917 to provide for the social and religious welfare of Jews serving in American armed force), as particularly helpful in supplying names of Jewish servicemen. The 12th Annual Report of the AJC—issued in 1919 for the year 1918—contains the First Report of the Office of Jewish War Records. The AJC also issued the reports separately as a pamphlet, The War Record of American Jews, First Report of the Office of War Records, January 1, 1919.

The First Report documented the creation of 100,000 records of individuals identified as Jews, and estimated that a total of 150,000 to 200,000 Jews had served in the American armed forces. The report emphasized that the percentage of Jews serving in the military exceeded their percentage of the U.S. population, especially in the combat arms. Leavitt concluded that “The Jews of America have contributed their full quota to the winning of the war, and a generous margin beyond their quota; that they have enlisted cheerfully, fought gallantly and died bravely for the United States.”

The 13th Annual Report of the AJC contained the Second Report of the OJWR, dated October 19, 1919—less than a month before the Armistice was signed on November 11, 1919. The number of records of individuals collected had increased to 175,000, of which 150,000 were unduplicated. Quoting from the report: “... The present figures tend to strongly confirm the estimate…that the Jews of America have probably contributed, numerically, from thirty-three to fifty per cent more than their quota.” Data collection for the full report was to include community surveys, systematic collection of the war records of civilians who had served in war-related activities, and verification of service data by access to military records.

The names and service data of individual Jewish servicemen were obtained from the following various sources: the Jewish Welfare Board; national Jewish organizations; local congregations, fraternal organizations, labor unions, and Zionist organizations; newspaper reports; information solicited from servicemen, their families, and relatives; and the U.S. War Department and local draft board lists. In addition to the collection of basic service data on Jews in the military from these sources, the OJWR sent out 16,000 detailed questionnaires to Jews whom it believed had served as Commissioned Officers, and to servicemen—both Officer and the Ranks—or their next of kin, whom it believed had been wounded or killed, and/or were cited for honors in WWI. As of the Second Report, 5000 replies had been received. 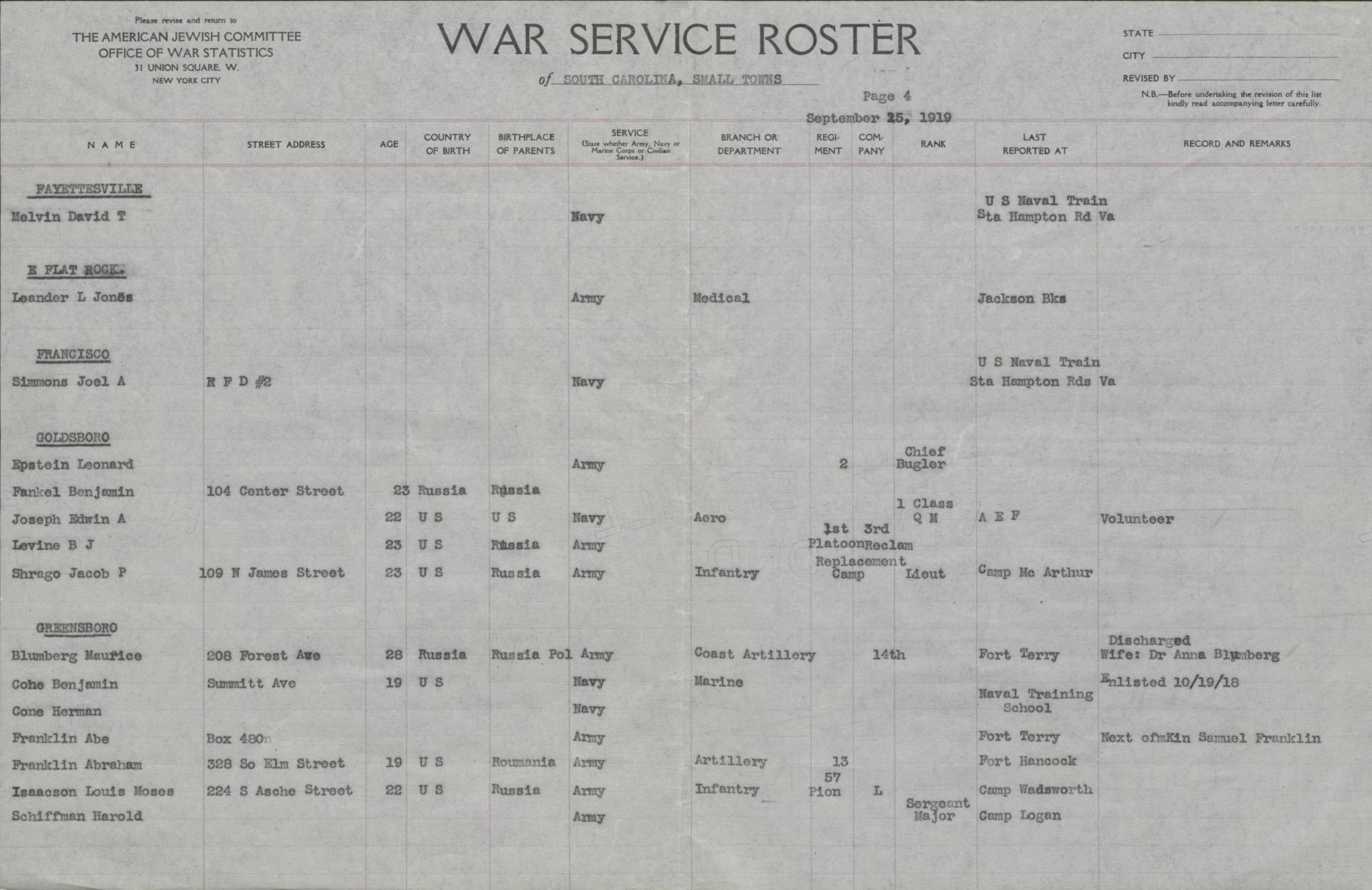 The 14th Annual Report of the AJC contained the Third Report of the OJWR, dated November 14, 1920. The Third Report was brief, anticipating the publication of a Fourth and final report. The Third Report increased the total number of Jews who had served in WWI from 200,000 to 225,000. The Report also confirmed a 4 per cent Jewish participation in military service in comparison to the 3 per cent Jewish population of the U.S., and a volunteer rate of 20 per cent, “...unexcelled, as far as known, by any other element of the American population.” The OJWR estimated that approximately 2,800 Jews had died in service. No further report was ever made. The Office of Jewish War Records closed on July 31, 1921.