Clarence Rowe Suddreth Sr. was born either on January 14, 1895 or 1897, in Caldwell County, N.C., to John Lloyd and Cornelia Willie [also reported as “Willie Cornelia”] Bowman Suddreth. By 1900, the Suddreth family was living on a farm owned and operated by John Suddreth. By 1910, the Suddreth family was living in Lenoir, N.C., and Clarence Suddreth was working as a laborer in a furniture factory as a young teenager. Clarence would leave high school after his second year.

While working as a clerk, Clarence Suddreth enlisted in the North Carolina National Guard at Hickory, N.C., on June 22, 1916. He served in Company A, 1st North Carolina Infantry. Suddreth went with his unit when the National Guard was called to the Mexican border in 1916, as part of the U.S. Army’s Punitive Expedition against Pancho Villa. It is unknown how long he remained along the border, but he returned to North Carolina by February 13, 1917. By that point, Suddreth was no longer on active guard duty. During his time in the National Guard, he reached the ranks of Corporal and Sergeant. 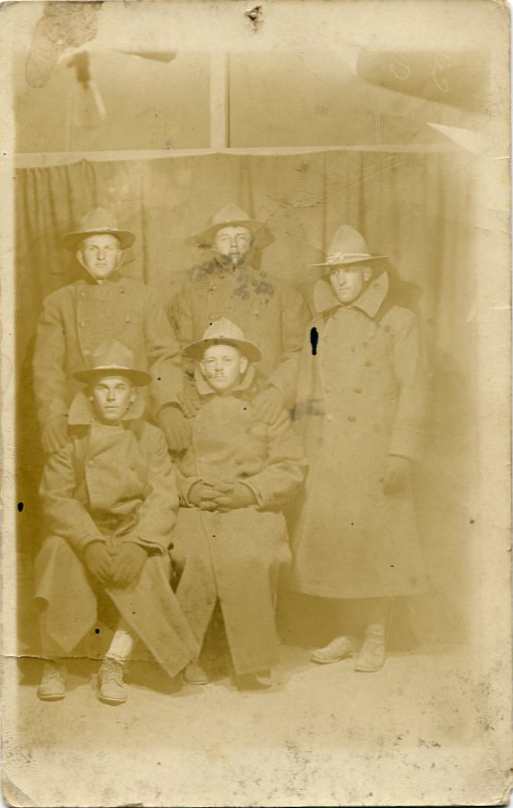 Suddreth’s unit was transferred into federal service for World War I in the U.S. Army with the North Carolina National Guard on August 5, 1917. His unit was called into training on July 25, 1917, and Suddreth remained with them as a Sergeant until August 4th. On August 5, 1917, Suddreth was discharged from the National Guard in order to be assigned to federal military service on the same day. On September 14, 1917, Suddreth was reassigned to the 105th Engineer Train, 105th Engineers Regiment, 30th Division, U.S. Army, which was stationed for training at Camp Sevier, S.C. 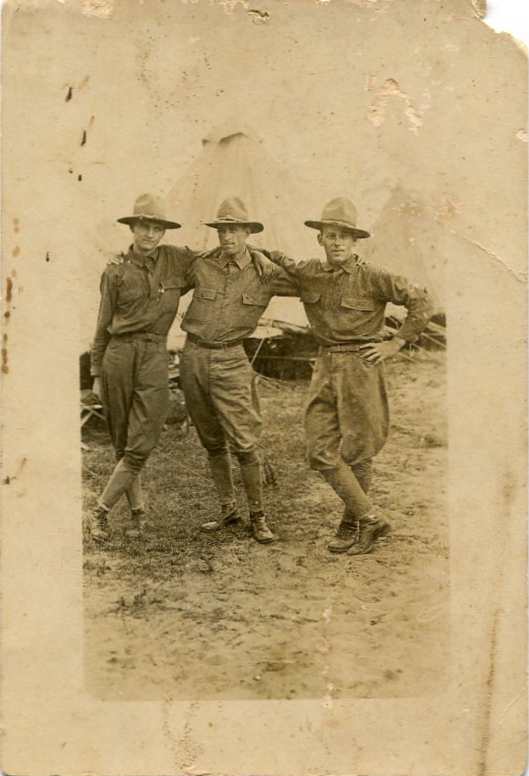 On May 26, 1918, Suddreth and his unit left from the United States aboard a troop transport ship for Europe. In mid-July 1918, Suddreth’s unit was billeted with British troops in Flanders during the Second Battle of the Marne, being the first Americans in combat there. Clarence Suddreth was wounded in action on July 16th during a German bombardment of his position by artillery and airplanes. He was struck in six places by bits of flying shrapnel: in his head; right hand; legs—including his left hip; and right foot. An inch and a half long piece of iron shrapnel was pulled from his hip, while another piece of shrapnel could not be removed by the doctors. 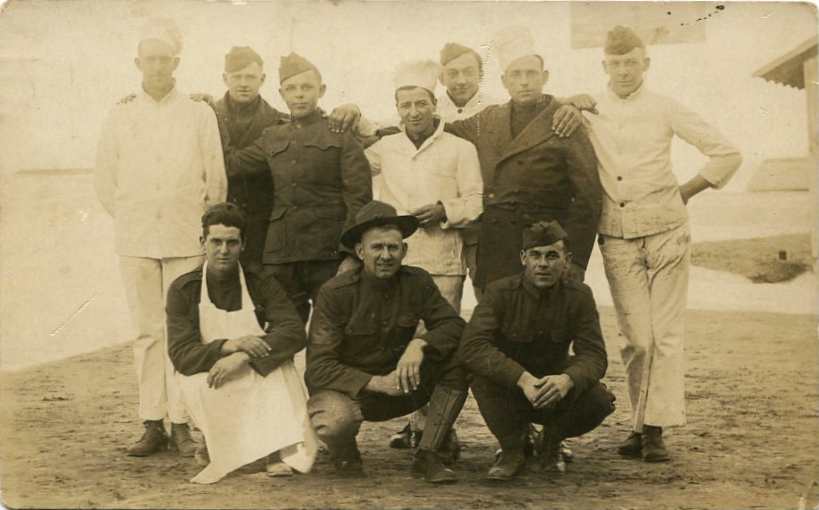 Suddreth was sent to a base hospital in London, England. He would remain there until December 8, 1918, when Suddreth sailed for the U.S. aboard the British hospital ship Celtic. Upon arriving back in New York City, he telegrammed his parents to let them know he was back in the country. On Christmas morning 1918, Clarence Suddreth surprised his parents by walking into their house, having not told them he was coming home on leave. After his leave, Suddreth went to Camp Meade, Maryland, assigned to the 4th Prev. Convalescent Company. Due to his injuries, Suddreth was honorably discharged at Camp Meade on January 29, 1919, having reached the rank of Sergeant. 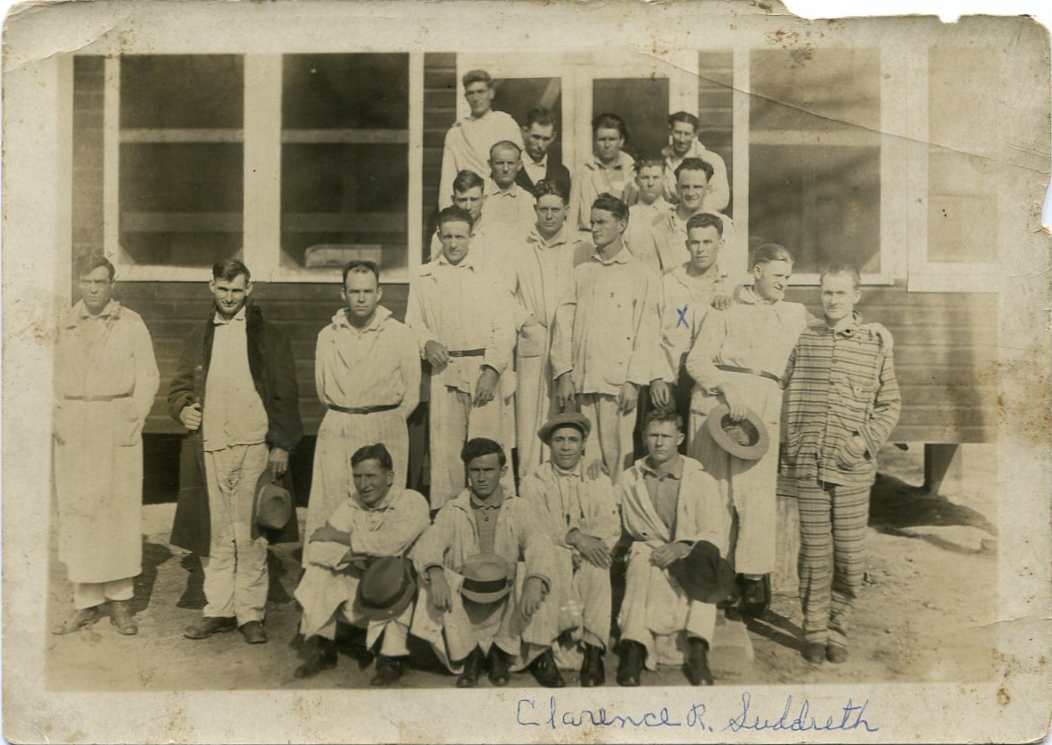 After the war, Clarence Suddreth returned to live with his parents in Lenoir, N.C. By 1920, he was living with his family, but had no listed line of work apart from working around his family’s farm. This may have been due to his war injuries. On September 16, 1920, Suddreth married Frances Tuttle in Caldwell County, N.C. By 1930, Clarence Suddreth Sr. was working as a mechanic in an auto repair shop. By 1940, he was working as a lumberman for a private business in Lenoir. After the U.S. entered World War II, Suddreth Sr.’s son Clarence R. Suddreth Jr. would serve in the U.S. Navy as a Radioman Second Class aboard the USS Missouri (BB-63), an Iowa-class battleship. 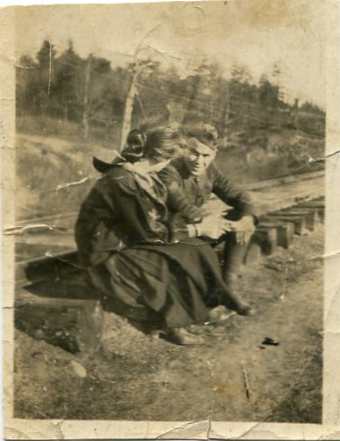 During WWII, Clarence Suddreth Sr. worked in a civilian job with the U.S. Army at Fort Bragg, N.C., apparently working around German and Italian prisoners of war (POWs) assigned there (though his exact position is unknown). Clarence and Frances Suddreth moved from Lenoir to the town of Raeford in Hoke County, N.C., just south of Fort Bragg in order for Clarence to be closer to his work. The Suddreths lived in Raeford until his retirement, when they moved to Reidsville, N.C., to be closer to their son Clarence Suddreth Jr. and his wife in Reidsville, N.C.

Clarence R. Suddreth Sr. died on January 21, 1976, in Reidsville, N.C., and was buried in Reidlawn Cemetery in the same city.