Blackbeard, Edward Teach, Tatch, Thatch, or whatever variation came to mind, was a marked man.

His relative comfort and ease of operation in North Carolina were a threat and an affront to the royal governor of Virginia. Even before America was the United States, questions of sovereignty arose. The cornering and killing of Blackbeard was such a case. He was America’s most wanted, the most notorious and effective pirate operating in the New World. He had to be stopped. But did Virginia’s governor have the right to send an expeditionary force into North Carolina to eliminate Blackbeard?

In the five months that Blackbeard made the proprietary colony of North Carolina home, he lived a life of comfort, continued to associate with known scalawags, and seemed free to resume his piratical ways at any time.

Some historians say it was a gathering of pirates at Blackbeard’s favorite hangout in September 1718 that pushed Virginia Governor Alexander Spotswood over the edge. He feared the brethren would wreak havoc on shipping into Virginia by constructing a pirate fortress at his back door. That compounded a threat Spotswood could no longer endure.

The Politics of a Propertiorship

North Carolina Governor Charles Eden had been no help in curtailing Blackbeard; some said he was in collusion with the rogue. No, Spotswood would devise a plan to take down Blackbeard alone. As a royal colony, Virginia could call upon the mighty military force of the crown. North Carolina as a proprietorship, controlled by eight Lords Proprietors granted land rights by King George, had no such military might.

The Scene at the End 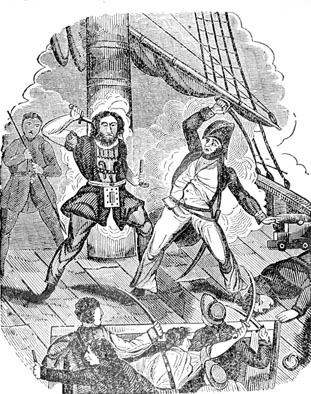 Maynard wisely employed two lightweight sloops to go into the shallow waters of the sounds and inlets, measured by sounding weights. One of the sloops was the site of Blackbeard’s final battle. In Blackbeard the Pirate: A Reappraisal of His Life and Times, Robert E. Lee notes that Spotswood even paid for the expedition himself. He wanted sure action “for breaking up that Knott of Robbers,” and got swift approval from the House of Burgesses.

They got their man. Blackbeard was tricked into a fight on Maynard’s sloop and was killed in fierce combat with five bullets and severe cuts to his body. But Governor Spotswood could not long enjoy his project’s success.

Governor Eden and the people of North Carolina resented the secret and highhanded manner of the operation. In the unorthodox undertaking not only was Blackbeard killed but the contents of his ship were seized and taken to Virginia for disposal. English law still guided the colonies, and legal action was pursued.

You are not to Grant Commissions or Mark or Reprisals against any Prince or State, or their Subjects in Amity with us, to any person whatsoever without our Especial Command.

It is not determined that the crown ever ruled on this case; perhaps the ends justified the means, and possession is nine-tenths of the law. It is clear that the Golden Age of Piracy soon came to an end with the death of Blackbeard.