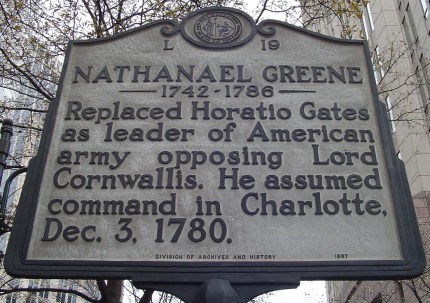 Born in 1742, Greene was raised in a Quaker household that denounced warfare.  He nevertheless developed a keen interest in military history and tactics as a young man, and was expelled from his Quaker meeting in 1773 for having attended a military parade.  Subsequently joining the local militia, he took an active role in early efforts towards American independence.  At the outbreak of war, Greene moved swiftly through the American ranks, and was promoted to brigadier general in 1775 during the Siege of Boston.

The next year, at the age of 34, he became the youngest officer promoted to major general in the Continental Army.  Greene was one of Washington’s closest confidants and respected commanders throughout the war.  As commander of the Southern Army, he performed remarkably, and proved himself a genius of strategy and logistics.  His command of American forces directly led to the British defeat at Yorktown in 1781, and therefore ultimately to American independence.

Greensboro and Greene County are both named in his honor.