“Babe” Ruth Gets His Nickname in Fayetteville 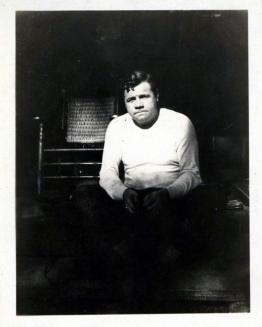 On March 7, 1914, George Herman Ruth Jr. hit his first home run as a professional baseball player and gained the nickname “Babe” in Fayetteville.

Ruth began playing baseball in his native Baltimore. At age 19, Jack Dunn, manager of the Baltimore Orioles, recognized his talent and signed him to his first professional contract. A few weeks later, the team headed to Fayetteville en route to Florida for spring training.

While in Fayetteville, the players learned that Dunn had legally adopted Ruth to keep him with the Orioles. That, combined with Ruth’s playing on the elevators at the Lafayette Hotel, resulted in the older players teasing him as “Dunn’s baby,” later shortened to “Baby” and “Babe.”

In the last inning of the exhibition game at the Cape Fear Fair Ground, Ruth hit a long home run. He described it saying, “I hit it as I hit all the others, by taking a good gander at the pitch as it came up to the plate, twisting my body into a backswing and then hitting it as hard I as I could swing.” Ruth later commented, “I got to some bigger places than Fayetteville after that, but darn few as exciting.”