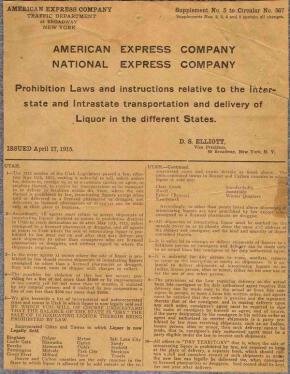 On May 26, 1908, North Carolina voters approved a prohibition on the sale of alcoholic beverages statewide. North Carolina was the first state in the nation to approve such a measure, and did so by the wide margin of 62 to 38 percent.

Restrictions and regulations related to the sale and use of alcohol existed in North Carolina since the early 1700s, but the temperance movement, with calls for statewide prohibition, were not full in swing until the mid-1800s. During the Civil War, the legislature prohibited the use of various crops to make alcoholic beverages because the crops were needed for food. Throughout the late 1800s, the General Assembly gave local communities the option to ban alcohol and also began passing special legislation prohibiting saloon licenses in particular areas of varying sizes.

The Prohibition enacted by voters in 1908 went into effect in January 1909. The federal government’s Eighteenth Amendment to the Constitution became effective in 1920 making it illegal to manufacture, sell or transport intoxicating liquors in the United States. Nationwide Prohibition was ended with the passage of 21st Amendment in 1933. North Carolina was one of only two states that refused to ratify the repeal.