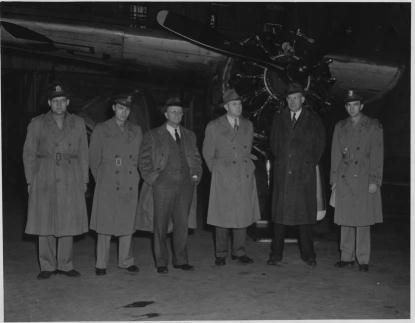 On June 12, 1942, the U.S. Army Air Force took over Seymour Johnson Field for use as a training center. In 1941, the Works Progress Administration built a municipal airport south of Goldsboro; the dedication was held one week before the attack on Pearl Harbor. The field was named for Seymour Johnson, a Goldsboro native, U.S. Naval Academy graduate and test pilot for Grumman Aircraft who died in a crash shortly before the war.

At the peak of its strength, the base hosted 27,000 troops. During the course of the war more than 250,000 troops trained there. The 326th Fighter Group arrived in 1943, and in 1944, basic training of F-4 pilots became the primary mission of the base. At the close of the war the base functioned as a separation center. In May 1946, it was deactivated.

In April 1956, the U.S. Air Force reopened the base following a successful campaign by Goldsboro community leaders. Today the base is home to the F-15 Strike Eagle. It is the only Air Force base named for a naval officer.