Felix Walker, North Carolina Congressman, and the Origins of “Bunk” 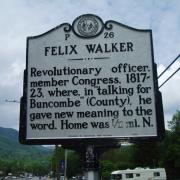 On February 25, 1820, Rep. Felix Walker delivered a rambling speech in Congress that would go little remembered but for the abuse he took that day.

Walker moved to western North Carolina from what is now West Virginia in 1768. He was a militiaman and took part in the Revolutionary War. Walker served in Congress from 1817 until 1823, and at that time Buncombe County was larger than its present size and comprised the core of his Congressional district.

As a result of the fateful speech, which had little relation to the topic at hand and during which colleagues tried to cut him off, Walker gained a reputation for “speaking for Buncombe.” The phrase quickly became short for any sort of spurious or questionable statement. Walker’s reputation, therefore, was discredited and his thoughts dismissed as “bunkum” or “bunk.” Walker moved to Mississippi in 1824 and lived there until his death in 1828.

“Bunk,” in due course, became part of the American lexicon as a word indicating nonsense. In 1916, Henry Ford, speaking about living in the present, made the oft-quoted statement, “History is more or less bunk.”