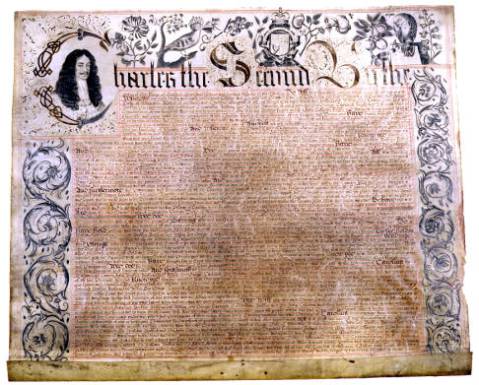 On March 24, 1663, King Charles II granted a charter for land in America to the Lords Proprietors, who were eight of his closest supporters during the Restoration of 1660.  Since a permanent English settlement in the new world was important, the king gave broad powers to the proprietors.

The powers guaranteed political and religious freedoms to the inhabitants of Carolina, which stretched from the Atlantic Ocean to the South Seas, encompassing an area roughly from the middle of Albemarle Sound to what is now the Georgia/Florida border. Inhabitants of the new colony claimed many of the same rights as English citizens, the right to import and export goods, the right to be tried in Carolina for a crime committed there, personal and property rights and a basic form of religious freedom.

In 1665, another charter was issued which amended the 1663 document and moved the northern boundary to include the prosperous and more populous Albemarle region.  It is likely that no more than two of the proprietors ever saw any of their Carolina lands, and their control over the colony was unstable. Regardless, many of the charter’s provisions became the basic principles upon which American freedom is based.