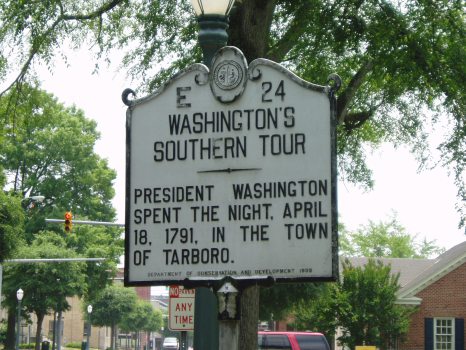 On April 18, 1791, President George Washington arrived in Tarboro. Washington was met at the Tar River by Col. John B. Ashe who escorted him into town. The procession was welcomed by a salute from a single cannon.

While in town, the President was entertained at the home of Major Reading Blount. After a single night’s stay, Washington left Tarboro for Pitt County. In his diary, Washington remarked that the town of “Tarborough” was “more lively and thriving” than Halifax.

Washington’s stay in Tarboro was part of tour of the Southern states that he embarked on in early 1791, after establishing a site for the new “Federal District” along the Potomac River. The tour was part his effort to visit every state during his term of office.

After leaving Virginia and crossing the Roanoke River, Washington’s first stop in the Old North state was Halifax. From there, the President’s carriage tour took him through Tarboro, Greenville, New Bern, Trenton and Wilmington before heading to South Carolina. On his return trip, Washington came back into North Carolina near Charlotte and traveled northward, visiting Salisbury, Salem and Guilford Court House.

NCpedia has a great overview of Washington’s Southern tour.