Benjamin Duke and the “Dukes of Durham”

On April 27, 1855,Benjamin N. Duke was born on the Duke family farm north of Durham. 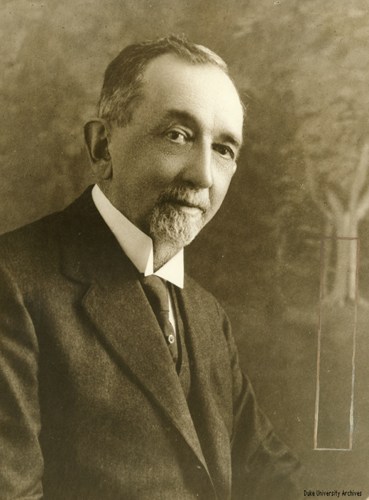 Often sickly as a child, Duke didn’t let his health get in the way of helping with the family tobacco business that began shortly after the end of the Civil War. He became a partner in the business when it was incorporated in 1878, and became treasurer of the American Tobacco Company in 1890 when the Duke organization became part of that enterprise.

Duke was the primary member of the family engaged in setting up Erwin Mills, the Dukes’ foray into textiles, and he went onto to serve as president of a number of the family’s other holdings.

Not as able a businessman as his brother Buck, Duke took to managing his family’s philanthropic efforts after working with Buck to found what is now Duke Energy. After his father financed what would become Duke University, Ben helped steer the school through its early days and was the primary link between the university and the family.

Ill during most of the last two decades of his life, Duke gave large portions of his fortune to his wife and children before dying in 1929.