A. J. Tomlinson’s “Fields of the Wood” 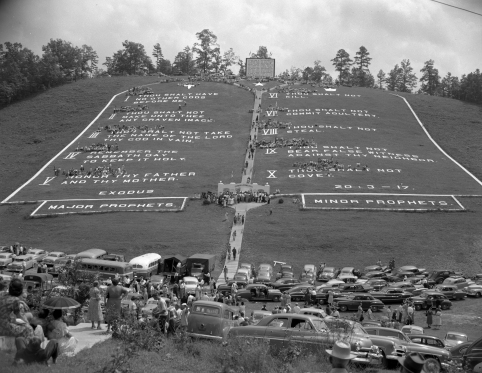 On June 13, 1903, Ambrose Jessup Tomlinson spent much time in prayer at the “fields of the wood” in Cherokee County and had a revelation that the local Holiness church was the Church of God as prophesized in the Bible.

Tomlinson, born in Indiana in 1865 and known to most as “A.J.,” made his living as a Quaker Bible salesman. He traveled widely before settling in the mountains of North Carolina to spread the word of his adopted Holiness church. There he published a monthly religious tract intended for the “speedy evangelization of the mountain districts of North Carolina, Georgia, Tennessee and the world.”

Tomlinson’s joining the church after praying on the mountain in June 1903 is believed by members to have begun the restoration of the true Church of God. Tomlinson became a charismatic leader of that congregation and others soon after. In 1907, the organization took the name Church of God, and within a few years, joined the Pentecostal movement.

In 1940, Tomlinson established a monument in Murphy at the site of his revelation from God. Before he died in 1943, he inscribed into the hillside in rock the “world’s largest Ten Commandments.” Now known as Fields of the Wood, the site is a Bible park operated by the Church of God of Prophecy.