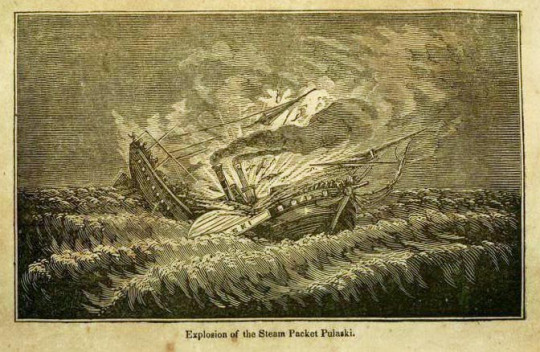 On June 14, 1838, a boiler on the steamship Pulaski exploded while the ship was off the North Carolina coast. The vessel was bound for Baltimore from Savannah. She carried a crew of about 36 and close to 150 passengers, many of whom were killed immediately by the scalding steam. Others drowned or perished when struck by falling wreckage. Two of the Pulaski’s small boats with survivors made it to shore the following day, landing in Onslow County.

Of the passengers who were not killed instantly or who made it to the lifeboats, many floated on two large chunks of the wreck, while others drifted on pieces of furniture lashed together or small shreds of debris.  After four days drifting in the open sea, 23 people were taken off a portion of the wreck by the schooner Henry Camerdon. The bleak survivors shared that they had seen another group that morning and the ship headed in that direction and found and saved another seven people.

Two of the survivors, who drifted together on pieces of wreckage for a number of days, had plenty of time to get to know one another and after experiencing each other’s knack for enduring, became engaged at sea.