The Death of Elisha Mitchell 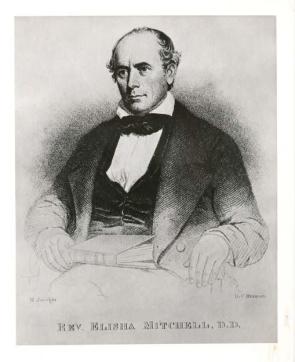 On June 27, 1857, Elisha Mitchell, exploring the Black Mountain range, slipped and fell to his death in a deep pool at the bottom of a 60-foot waterfall. Search parties were organized and the body was discovered several days later by “Big Tom” Wilson.

Wilson was an extraordinary tracker and guide. He was also noted locally as a skilled bear hunter and storyteller. Wilson located Mitchell’s trail and tracked him to the place where he fell. Since the pocket watch Mitchell had been wearing was broken at 8:00, it has been assumed that was likely the time of his death.

In 1835, Mitchell announced that a peak in the Black Mountains was the highest in the eastern United States. He estimated its height at 6,672 feet, only 12 feet short of the present official height. A “controversy of major proportions” ensued in the 1850s between Mitchell and Thomas L. Clingman, who called into question the accuracy of the earlier observations and measurements. Mitchell died in the effort to set the record straight.

Initially interred in a cemetery in Asheville, Mitchell’s remains were later moved to the top of the mountain which now bears his name.