Origins of the “Lost Colony” Mystery 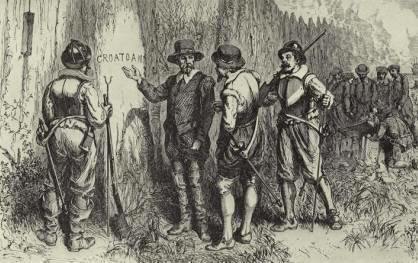 On August 18, 1590, Englishman John White returned to Roanoke Island to resupply the colony established on the island in 1587.  White found the settlement abandoned. A single word “CROATOAN” was carved on a post in the fort.

In 1587, at the urging of fellow colonists, Governor White had returned to England to gather supplies for the blossoming colony. Before leaving Roanoke Island, White and the colonists agreed that they would carve a message in a tree if they moved. Additionally, a Maltese cross would also be carved if the move was a forced. Since White didn’t find that particular distress signal, he was hopeful that the colonists would be found alive. White’s granddaughter, Virginia Dare, had been born exactly three years earlier.

After arriving back in England in October 1587, White was prevented from immediately returning to Roanoke Island because of England’s war with Spain. His attempt to do so in 1588 ended when pirates stole all his supplies. Finally, he was granted permission to return in early 1590.

White had the misfortune of arriving at Roanoke Island in poor weather and terrible landing conditions, leading to the death of seven mariners by drowning. The weather forced White to leave without searching adjacent areas for the colony.