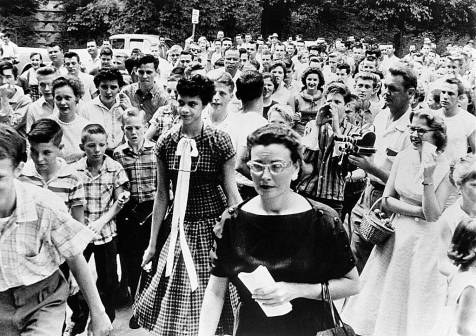 On September 4, 1957, Dorothy Counts enrolled at Harding High School, one of four segregated white schools in Charlotte to receive their first African American students that day. She was accompanied by Reginald Hawkins, a dentist, who would go on to be the first black man in the modern South to seek statewide office when he ran for governor in 1968.

Counts, only 15 at the time, encountered a mob on the sidewalk. White boys and girls, encouraged by their parents, jeered and spat on her. She endured the harassment stoically and marched proudly into a classroom, where other students hissed, mocked and threw garbage at her and where the teachers ignored her. Newspaper photographers captured the scene outside and inside the school. The episode embarrassed and shamed many in the city.

After a week, Count’s father withdrew her from Harding and moved the family to Philadelphia. She returned to Charlotte for college at Johnson C. Smith University and dedicated her career to work in Queen City nonprofit organization and as an advocate for child care.

Desegregation of schools in Charlotte was still unresolved 12 years later, when, in 1969, Judge Robert McMillan issued his decision mandating busing to achieve integration.