Harry Golden of the Carolina Israelite, One of a Kind 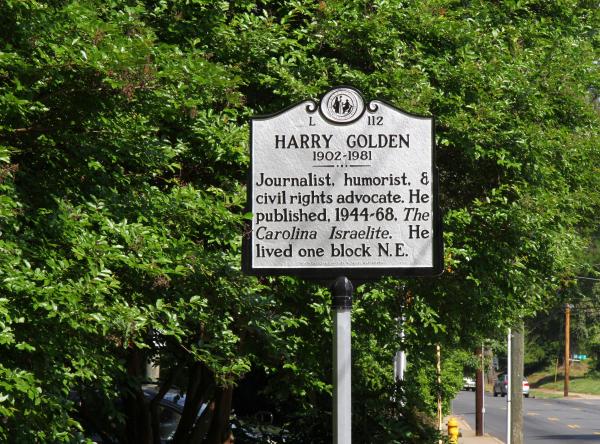 On October 2, 1981, journalist and humorist Harry Golden died. Golden achieved wide fame as publisher of The Carolina Israelite, which he issued between 1944 and 1968 from Charlotte to an international audience.

Golden’s trademark was to use humor and satire to oppose Southern racial and political practices. Martin Luther King Jr. called him one of “our white brothers who have grasped the meaning of this social revolution and committed themselves to it.”

He first came to national attention in 1956 after he testified before the Pearsall Commission that white Southerners did not seem to mind standing with African Americans: “It is only when the Negro ‘sets’ that the fur begins to fly.” Thus, he suggested, public schools could be painlessly integrated by providing desks but no seats. He went on to suggest 16 more plans that mocked Southern racial mores.

Wide circulation of his “Vertical Negro Plan” generated interest in his writing and, in 1958, a compilation of his columns, Only in America, became a best seller. He advised Robert Kennedy in his 1964 and 1968 campaigns for the U. S. Senate and the Democratic presidential nomination.

In 1979, Golden received the North Carolina Award for Literature. He is buried in Hebrew Cemetery in Charlotte.