The Declaration of Rights: Milestone at Halifax, 1776 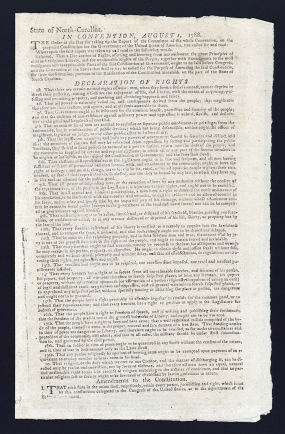 On December 17, 1776, the Fifth Provincial Congress at Halifax issued the North Carolina Declaration of Rights. Consisting of 25 articles, the document outlined the basic rights of citizens of the new state and became part of the state constitution, which was issued the following day.

The Declaration of Rights was the work of a 28-man committee chaired by the president of the congress, Richard Caswell, and it was modeled on English legal and political traditions. The first provision emphasized that all political power comes from and is vested in the people, and other articles:

Notably, at the time, these rights applied to free people only, and not to enslaved people.

In an ironic twist, the citizens of the state did not vote on either the Declaration of Rights or the new constitution. Instead, they went into effect on the authority of the congress.