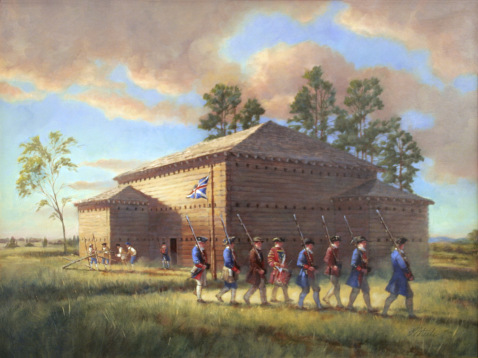 On February 27, 1760, Fort Dobbs was attacked by a force of more than 60 Cherokee warriors. The fort had been constructed four years earlier to protect the western frontier during the French and Indian War.

Fighting between the British settlers and their former allies broke out in 1759 as settlers were killed in revenge for the murder of several Cherokee the year before. As the only permanent fort on the colony’s frontier, the fort served as a safe-haven for settlers, and its garrison of soldiers helped to defend the region.

Colonel Hugh Waddell, the fort’s commander, noted that the Cherokee “found the fire very hot” as ten of his men engaged the Cherokee near the fort around nine o’clock at night. “I ordered my party to fire which we did not further than 12 steps each loaded with a bullet and seven buck shot,” Waddell later wrote. “They [the Cherokee] had nothing to cover them as they were advancing either to tomahawk or make us prisoners…”

Waddell retreated to the fort and the Cherokee broke off the attack. The combined casualties, killed or wounded, from the brief encounter included 12 Cherokee, two soldiers and one settler child.

Visit: Fort Dobbs in Statesville is now one of 27 sate historic sites, open to the pubic Tuesday through Saturday.