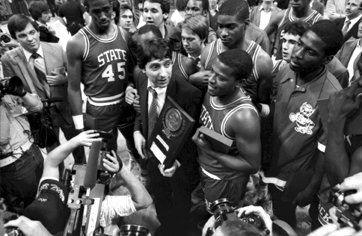 After a series of unlikely and often last minute wins that began during the Atlantic Coast Conference tournament weeks earlier, the “Cardiac Pack,” under the leadership of head coach Jim Valvano, culminated its run with a barn burner over the University of Houston Cougars. The Cougars were nicknamed “Phi Slama Jama” for their expertise in slam dunking basketballs over the heads of opponents, so chances were slim that the underdog Wolfpack would pull off the upset.

One Washington Post sports reporter wrote, “Trees will tap-dance, elephants will drive at Indy and Orson Welles will skip lunch before North Carolina State finds a way to beat Houston.” But find a way they did. Both State’s first and last shots were dunks, and that last shot came just as the buzzer sounded, clinching the victory for the Pack, 54-52.

The images of Lorenzo Charles making the basket and Coach Valvano running around the court looking for someone to hug have become iconic in sports culture, and both are fitting tributes to two extraordinary individuals who are no longer with us.