A Hex on Her Houses: Harriet Irwin of Charlotte 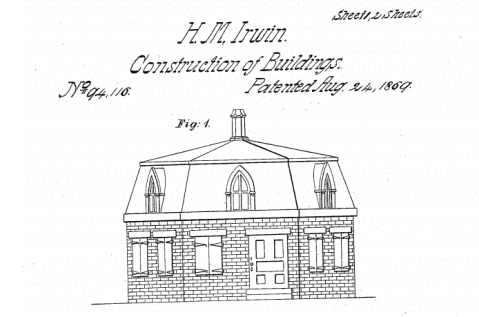 Irwin’s design was for a hexagonal house, planned in such a way that there were no hallways and no four-cornered rooms. Concerned with domestic efficiency, she theorized that her idea utilized space more effectively than a rectangular building and encouraged better airflow.

Irwin’s ideas received some attention from the press at the time and reportedly inspired at least two houses in Charlotte, though both were demolished.

Born in Mecklenburg County in 1828 to a prominent clergyman’s family, Irwin spent most of her life in and around Charlotte. Aside from her work in architecture, Irwin was an author and social commentator. She wrote primarily nonfiction articles related to history and progress but also penned one novel concerning her architectural theories in which the hero lives in a hexagonal house.

She and James Irwin had nine children, five of whom survived infancy. She died in 1897.

The original patent is available online from the U.S. Patent and Trademark Office.