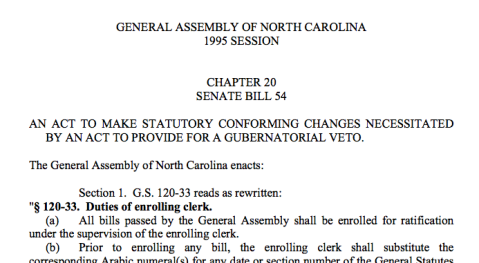 Part of the enabling legislation that granted the governor the veto.
Image from the General Assembly.

On January 1, 1996, North Carolina became the last state in the nation to grant its governor the veto power. The change met with the approval of voters the previous November when they overwhelmingly approved a constitutional amendment on the statewide ballot.

North Carolina historically opted for a weaker role for its governors, partially as a reaction to the harsh treatment that the state suffered under British royal governors during the colonial era. The governor wasn’t even popularly elected until 1835. Prior to that time, governors were elected by the state legislature.

Though a contentious issue at the time, governors have only opted to exercise the power 53 times. The first use of the veto didn’t come until 2002 when Governor Mike Easley sent a bill appointing people to various boards and commissions back to the legislature.

Local bills, amendments to the state and federal constitutions, and several other types of legislation cannot be vetoed by the governor. A three-fifths majority of the legislature can override any veto action.