No Parade as Duke Lost Rose Bowl Game in Durham, 1942 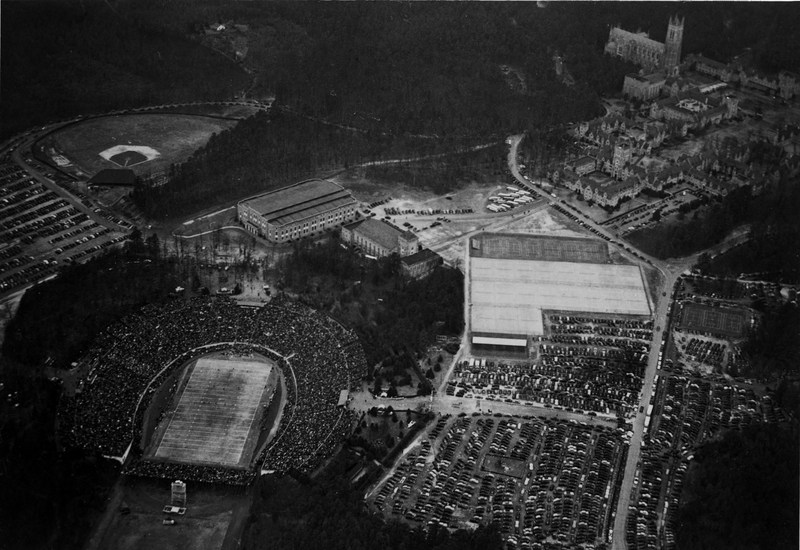 On January 1, 1942, the Rose Bowl was played in Durham—the only time the game has not been played in Pasadena, California. Since America had just joined World War II, there was concern about holding the game, or, indeed, any large public gathering, on the West Coast for fear of attack from the Japanese. The Duke University Blue Devils, Oregon State University Beavers, and all of their fans would potentially be in great danger if the game was played in California, organizers reasoned.

Before the Tournament of Roses Committee officially called the game off, Duke football coach Wallace Wade offered to host the game in the Bull City. The city of Durham and Duke University only had about two weeks to prepare for the festivities, and during that time, they managed to increase the capacity of the Blue Devils’ football stadium from 34,000 to 56,000 seats by borrowing bleachers from neighboring UNC and N.C. State. Tickets for the history-making game sold out in three days.  The face value of tickets for bleacher seats was $4.40, though scalpers offered tickets for as much as $25.

Duke was the clear favorite to win the hastily relocated bowl game. Wade had led the Blue Devils to an unbeaten and untied season in 1941. The game, however, was a major upset.  Oregon State won, 20 to 16.

For more about North Carolina’s history, arts and culture, visit Cultural Resources online. To receive these updates automatically each day, make sure you subscribe by email using the box on the right and follow us on Facebook and Twitter.