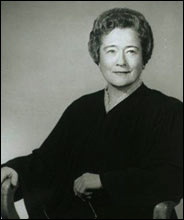 On January 2, 1975, Susie Sharp took the oath of office as Chief Justice of the Supreme Court of North Carolina.

Governor Kerr Scott had appointed Sharp a Superior Court judge 26 years earlier, in 1949, making her the first female judge in state history. As she rode the circuit she encountered the usual challenges, but experienced some unexpected ones, too. In Morganton, the judge’s bathroom had only a sink and a urinal. In another instance, an attorney in one of her trials once began his summation, “Gentlemen of the jury, the presence of sweet womanhood in this courtroom today rarefies the atmosphere.”

Governor Terry Sanford appointed Sharp to the state’s high bench in 1962, and she was elected by the people that fall. Twelve years later, she received 74 percent of the vote to become the first woman Chief Justice in the nation to be popularly elected.

The petite jurist, who served until 1979, was a native of Rocky Mount but lived most of her life in Reidsville. She was at once progressive, an advocate for judicial reform and for humane prison conditions, but also deeply conservative, passionately arguing against the Equal Rights Amendment. Time magazine named Sharp one of twelve “women of the year” in 1975.