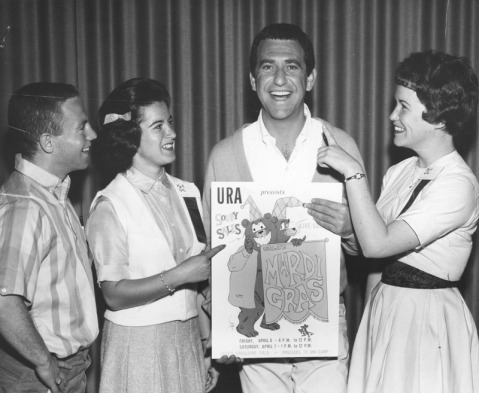 Sales on his show in 1962. Image from the Los Angeles Public Library.

Sales’ father, Irving, immigrated to America from Hungary in 1894. Irving operated a dry goods store, which was then a line of work common to Jews in small-town North Carolina. His son, the funnyman, later quipped that his father supplied all the sheets needed by the local Ku Klux Klan.

The Supman family eventually relocated to West Virginia, where Milton graduated from Marshall University. After a stint in the South Pacific during World War II, Supman took a new name and entered show business. Soupy came from a family nickname, Soup Man, and Sales from a famous vaudeville performer.

Sales first became successful on local shows in Detroit and Los Angeles. In 1964, his show moved to New York and was picked up by ABC. His broad slapstick humor involved live performers and puppets, notably White Fang and Black Tooth. Though targeted mostly at kids, the show appealed to adults as well and featured the stars of the day like Frank Sinatra, who asked to be plastered with a cream pie.

Later in life Sales was a regular on game shows such as Hollywood Squares and Match Game. He died in 2009.