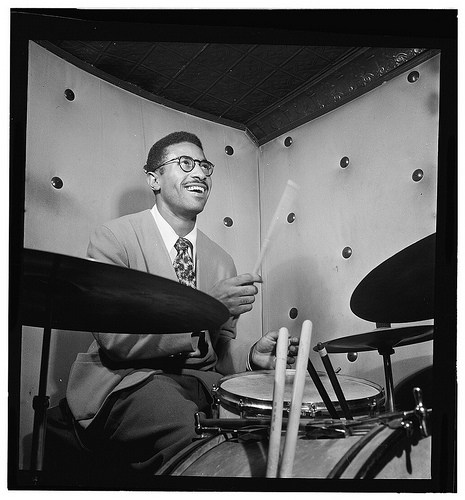 Max Roach performing in the 1940s, Image from Wikipedia

On January 10, 1924, popular jazz drummer Max Roach was born in Pasquotank County. Shortly after moving to New York City with his family in 1928, Roach began to study piano with his aunt. He showed an early aptitude for music and played in jazz bands throughout high school.

Roach began filling in for the drummer in Coleman Hawkins’s band in 1943, and, in 1944, he cut his first record with a group that included Dizzy Gillespie. From there he had a career marked by collaboration with the jazz and bebop greats of his day, including Miles Davis, Charles Mingus, Charlie Parker, Thelonious Monk, and others. Later in his career, Roach wrote music for the civil rights movement, taught percussion at the University of Massachusetts at Amherst, and composed pieces for the theater.

Among Roach’s many accolades are designation as a Jazz Master by the National Endowment for the Arts, receipt of a MacArthur Foundation Genius Grant, and membership in N.C. Music Hall of Fame.