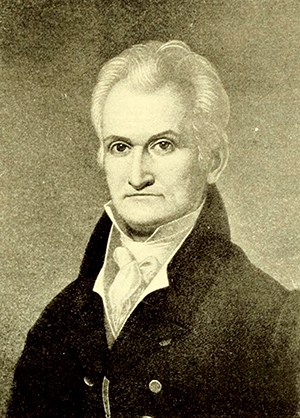 On January 14, 1834, William Polk, the last surviving field officer of the North Carolina Continental Line, died in Raleigh. Polk served during the Revolutionary War with distinction, seeing action at Germantown, Brandywine, Eutaw Springs and Cowan’s Ford. After the Battle of Guilford Courthouse, he was promoted from major to lieutenant colonel and became known as “Colonel Polk.”

Shortly before the turn of the century, Polk moved from his native Mecklenburg County to Raleigh, where he lived the rest of his life and played a prominent role in state and local affairs. His first public role was as a member of the Council of State in 1806. With the establishment of the State Bank in 1810, Polk was elected as its first president, serving in that position for 19 years.

In 1821, he spoke at the dedication of the Canova statue at the State Capitol. Four years later, he welcomed Lafayette with whom he had fought at Brandywine, to Raleigh and breakfasted with him at his North Street home. He was among the incorporators of the “Experimental Railroad” built in 1833 for the new Capitol. Polk was also an early member of the board of trustees of the University of North Carolina, serving in that capacity for 42 years.