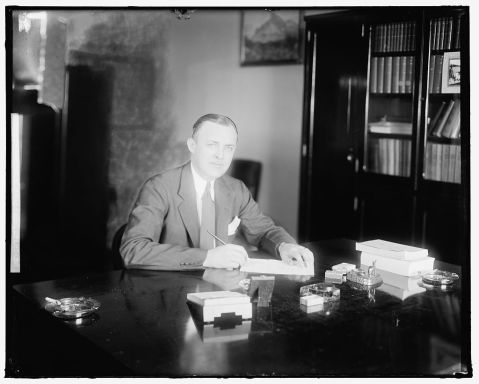 Cooley at his desk, date unkown. Image from the Library of Congress.

On January 15, 1974, congressman and agricultural advocate Harold Cooley died from the effects of emphysema.

As the longtime chairman of the U.S. House of Representatives Agriculture Committee, Cooley, a native of Nash County, was a powerful spokesman for farmers from the New Deal to the Great Society.

Democrat Cooley, by virtue of a special election in July 1934, filled the House seat in the Fourth District vacated with the death of Edward Pou. He went on to serve 17 terms in the U.S. House. His length of service as Agriculture Committee chairman (from 1949 to 1952 and from 1955 to 1967, interrupted by the 83rd Congress when Republicans held the majority) has not been exceeded.

Cooley joined the Agriculture Committee during the height of the New Deal and was a driving force in the development of Roosevelt’s agricultural program. He backed several reforms including those that provided for allotments, price supports, rural electrification, and soil conservation.

Cooley also sought to reach the world market with agricultural products, stating that “bread and butter rather than bullets and bayonets are the most powerful weapons in our arsenal.”

Cooley returned to his home in Nashville after losing his reelection campaign in 1966.