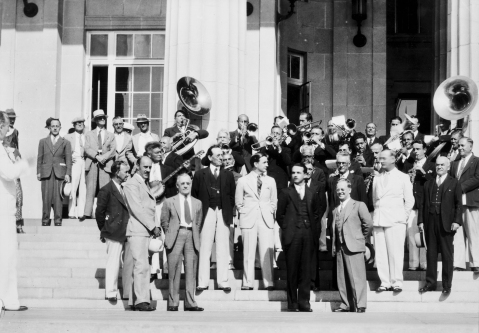 On January 21, 1959, Lamar Stringfield, the first conductor of the North Carolina Symphony, died in Asheville.

Raised in Raleigh, Stringfield was the sixth of seven children. His father, O. L. Stringfield, helped establish Meredith College. After attending college at Mars Hill and Wake Forest, Stringfield left school in 1916 to join the army. Returning home from tours of duty in Mexico and France, he began serious training in music, both in North Carolina and in New York.

In 1928, Stringfield completed his symphonic suite “From the Southern Mountains.” Known thereafter as an authority on southern ballads and folklore, Stringfield organized the Institute of Folk Music at the University of North Carolina in 1930 and collaborated with Paul Green on “The Lost Colony Songbook.”

In 1932, Stringfield helped organize the North Carolina Symphony, which was then headquartered in Chapel Hill. He served as the symphony’s conductor from 1932 to 1938.

After his tenure as conductor, Stringfield moved often, residing in Charlotte, Mars Hill, Burnsville, Barnardsville and Asheville. He remained active as a composer and served as guest conductor for major symphony orchestras across the country.