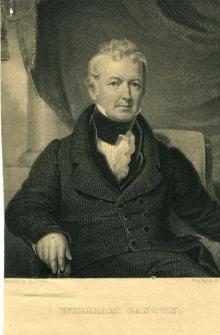 Image from the N.C. Museum
of History

On January 23, 1844, William Gaston died. A poet, politician and lifelong student of the law, Gaston was a leading figure in 19th century North Carolina politics. After growing up in New Bern and attending New Bern Academy, he graduated from Princeton in 1798 and was admitted to the bar later that year. In 1800, he transitioned from law to politics, serving in both houses of the General Assembly and in the U.S. House of Representatives.

In 1833, Gaston was appointed to the state Supreme Court, where he championed the abolitionist cause, though he himself was a slaveholder. A Catholic, he helped guide the Constitutional Convention of 1835 to a provision that eliminated a long defunct law that prohibited Catholics from holding public office.

In his twilight years, Gaston remained a court justice while occasionally embarking on the lecture circuit. An eloquent speaker and prolific writer, he was often asked to deliver commencement speeches and was popular among philanthropic societies.

Gaston is perhaps best known for his poem, “The Old North State,” which he penned in 1840. It was later set to music and adopted as the state song in 1927. Gaston County, the city of Gastonia and Lake Gaston are all named in his honor.