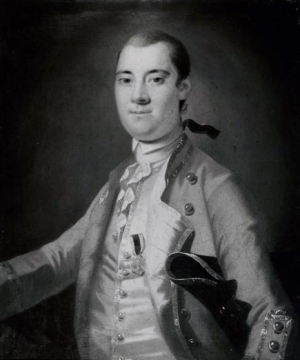 Image from the N.C. Museum of History.

Born in England, Tryon was not formally educated, but was boosted by family connections. A professional soldier, he was first commissioned as a lieutenant in 1751 and rose through the ranks thereafter.

Tryon was appointed lieutenant governor of North Carolina in 1764 and moved to the colony with his family that year. He assumed the duties of governor in 1765 upon Arthur Dobbs’ death. Tryon erroneously believed that the colonists would not object to a tax levied to erect a capitol and governor’s residence.  The assembly appropriated funds and authorized Tryon to oversee the project, which quickly exceeded the budget.

Some North Carolinians felt that injustices in the colony, including the tax for “Tryon’s Palace,” corrupt officials and lack of representation for the backcountry, needed to change. They formed a resistance group known as the Regulators. After several defiant incidents, a special session of the assembly was called, which caused further agitation.

Tryon led militia into the backcountry in 1768 and 1771, defeating the Regulators at the 1771 Battle of Alamance. While on the expedition, Tryon was notified of his transfer to the governorship of New York.

He returned to England in 1780, and died there eight years later.

Visit: Tryon Palace in New Bern, a reconstruction of the home that Tryon constructed, and Alamance Battleground in Burlington, the site of Tryon’s defeat over the Regulators, are both now state historic sites open to the public.