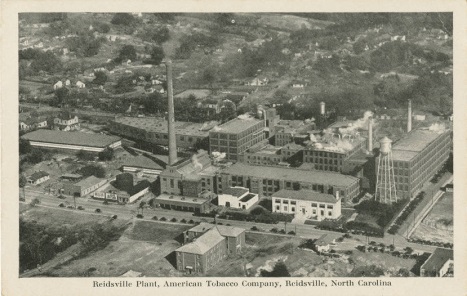 On January 31, 1890, the American Tobacco Company was incorporated, creating the world’s largest tobacco conglomerate. Driving the creation of this industrial giant was James B. “Buck” Duke of the Durham-based W. Duke, Sons and Company. Facing tough competition from another Durham-based smoking tobacco firm, Duke had decided in 1881 to enter the cigarette business.

By leasing newly invented cigarette-rolling machines from the Bonsack Company of Virginia, launching elaborate advertising campaigns and acquiring many smaller competitors, W. Duke Sons had become one of the nation’s top tobacco companies by 1890.

Joining with W. Duke Sons that year to form American Tobacco were Allen & Ginter, W. S. Kimball & Company, Kinney Tobacco and Goodwin & Company. Under Duke’s leadership, American Tobacco grew to monopolize the tobacco market, and in 1907, federal regulators filed an anti-trust suit against the corporation. After much litigation, the U.S. Supreme Court ordered it dissolved in 1911.

Duke helped reorganize American Tobacco into three companies: a much smaller American Tobacco, Liggett and Myers Tobacco Company and P. Lorillard Company. During the 1970s and 1980s, American Tobacco began acquiring a variety of non-tobacco products. It renamed itself American Brands in 1986, and since then, it has become Fortune Brands.