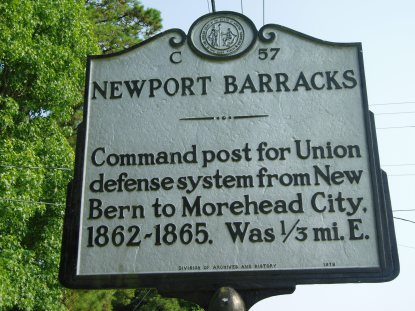 On February 2, 1864, Confederate troops engaged the men of the 9th Vermont Infantry at the Newport Barracks in Carteret County.

The 7th Regiment North Carolina Infantry built the barracks south of Newport for quarters in the winter of 1861 and 1862. Shortly thereafter, the cluster of log huts was captured by Union troops, who added a hospital, headquarters, stables, storehouse and earthworks. Newport Barracks effectively became a Federal supply depot, since it was located near both the Atlantic Ocean and railroad tracks.

In January 1864, 2,000 Confederate troops under the command of General James G. Martin advanced from Wilmington toward Morehead City to support General George E. Pickett’s mission to regain control of New Bern. They reached the barracks on February 2. Company D of the 2nd Massachusetts Heavy Artillery, stationed inside Newport Barracks, prematurely abandoned their posts and retreated as the Confederates advanced. The commander of the 9th Vermont set fire to the depot and followed suit. The fleeing troops also burned the railroad and road bridges.

The skirmish was largely indecisive, though Martin’s men managed to capture 30 Union troops and gather some supplies and equipment from the barracks before they were destroyed. When the Confederate troops learned of Pickett’s failure at New Bern, they returned to Wilmington.