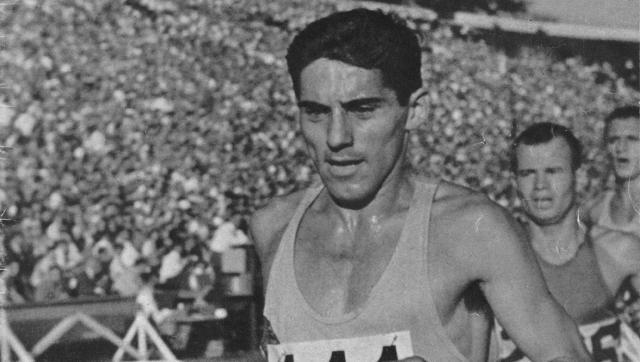 On February 10, 1962, Jim Beatty became the first man to run the mile indoors in under four minutes.

Born in New York in 1934, Beatty moved to Charlotte with his family when he was 4-years-old. Growing up in the Dilworth neighborhood, he delivered the Charlotte Observer for five years. Then focused on boxing, the young Beatty decided to start running his paper route to help him train.

Beatty convinced his high school’s track coach to let him try running the mile during the last meet of his junior year, discovered his speed and won it. In the course of a month he went from never having run a race to winning the state championship in the mile. He went on to run track at UNC, where he was a six-time All-American in track and cross country.

Beatty moved to California where in 1961 he joined the elite Los Angeles Track Club. The next year he broke 11 American records and three world records. Considered the nation’s top amateur athlete, he was named the 1962 James E. Sullivan Award winner.

Beatty returned to Charlotte where he remains an active member of the community. He was an inaugural inductee into the North Carolina Sports Hall of Fame in 1963.

Visit: The North Carolina Sports Hall of Fame exhibit is open on the third floor of the N.C. Museum of History daily.