On March 21, 1949, the Freedom Riders surrendered at the Orange County Courthouse in Hillsborough and were sent to segregated chain gangs.

In 1946 the U.S. Supreme Court declared that segregation on interstate buses and trains was unconstitutional, though segregation was still widely practiced across the south. The Congress of Racial Equality (CORE) decided to test compliance with the court’s ruling across the South by having interracial groups of protesters travel on Greyhound and Trailways buses. This "Journey of Reconciliation,” as it was dubbed, began in April 1947, and the protesters who participated became known as the “Freedom Riders.” 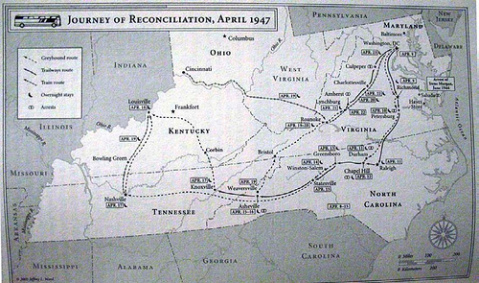 In Chapel Hill in April 1947, four riders, including one of the organizers, Bayard Rustin, were arrested and later went to trial. In 1949, Rustin and two white protesters surrendered and were sent to segregated chain gangs. Rustin published journal entries about the experience. His writings, as well as the actions of the “Journey” riders in April 1947, in time inspired Rosa Parks’ nonviolent protest in 1955 and the Freedom Rides of 1960-1961.