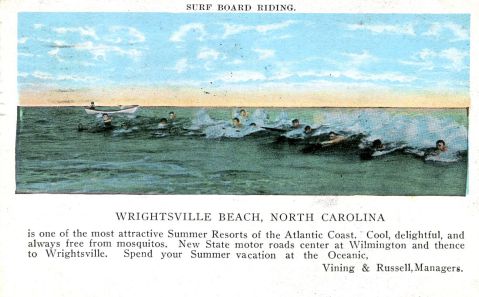 Bridgers wrote to Colliers in response to Alexander Hume Ford, founder of the Outrigger Canoe and Surfboard Club in Hawaii, who penned an article for the magazine the previous year encouraging readers to try the sport. 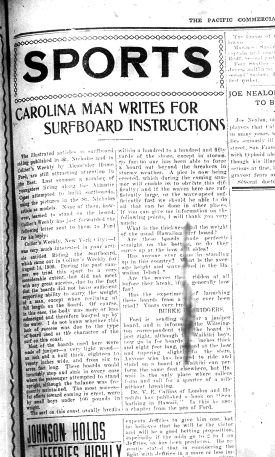 Bridgers wrote that people in Wrightsville Beach tried out surfing during the summer of 1909 without great results. The Lumina Pavilion, then one of the area’s premiere attractions, hosted a “surf board riding contest” over Labor Day, in fact.

Bridgers went on to describe the kinds of boards that the locals were using and the nature of the Atlantic Coast surf. The surfboards he described were built with local juniper wood, a traditional favorite of boat and ship builders, as it is resistant to wood-boring worms.

It is impossible to claim a “first” in East Coast surfing, but Bridgers’ experiments certainly would have been among the earliest appearances of surfboards in the Atlantic Ocean. The surfing that occurred in the Wrightsville Beach area in the early 1900s is the earliest documented in the state of North Carolina.

Recently Wrightsville Beach was named as one of the top 20 surfing towns in the world by National Geographic.