Hang Glider Adapted for Water Use, 1962 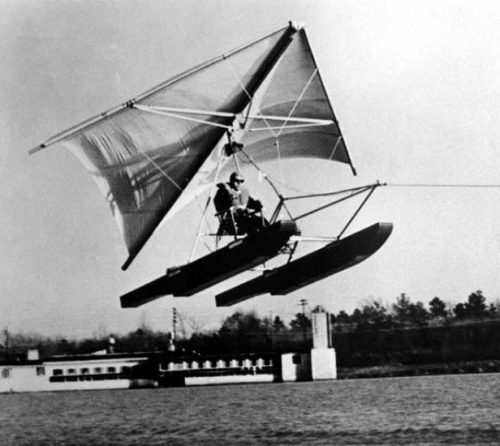 The Columbus County flight was the first water-based use of the glider that had been adapted by Purcell from technology created by aviation pioneer Francis Rogallo. The aircraft was a single seat open cockpit parasol-winged glider with skids to facilitate water takeoffs and landings.

Purcell, who studied at North Carolina State University, got a job at Bensen Aircraft Corporation, a gyrocopter manufacturer near the Raleigh-Durham Airport after graduating. He later opened his own company, Flight Dynamics, which designed and sold plans for a variety of aircraft.

Purcell thought up his designs after reading magazine articles about glider technology invented by Rogallo, often called the “father of hand gliding.”

NASA, which had previously been interested in Rogallo’s work, began to take an interest in Purcell as well. Purcell visited NASA in 1961 to demonstrate the FlightSail glider, which the nation’s space agency thought could be used as a substitute for traditional parachutes for the Gemini program.

Though NASA ultimately decided to use regular parachutes for Gemini, the Flightsail system and others like it are still remembered as massive improvements in glider technology, and Purcell marketed his technology for recreation throughout the 1970s.

A model of the FlightSail Purcell flew at Lake Waccamaw is in the holdings of the North Carolina Museum of History.