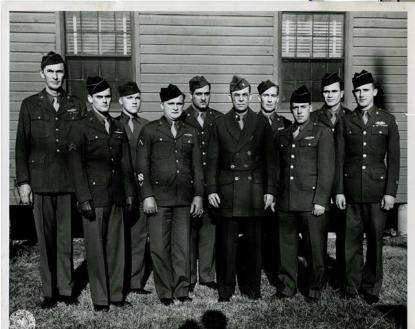 On August 4, 1942, Camp Butner, a 40,000-acre military training facility, officially opened. The camp spanned parts of Durham, Granville and Person Counties and was large enough to accommodate more than 30,000 troops.

As the war progressed, Camp Butner’s mission evolved to include the housing of prisoners of war. It served as one of two principal prison camps in North Carolina. The other was Fort Bragg. Italian prisoners were the first to arrive. Their numbers swelled to roughly 3,000 in time. They remained at Camp Butner until Benito Mussolini’s regime dissolved in September 1943, and German prisoners soon took their place.

Camp Butner’s prisoners attempted a number of escapes, but only one can be considered successful. On August 4, 1945, Lt. Kurt Rossmeisl, a German linguist, donned plain clothes and dark glasses before calmly walking out the camp’s front entrance. Considered by some to be the “most dangerous” of the nation’s escaped prisoners at the time, Rossmeisl remained at large in the U.S. until he surrendered in Cincinnati in May 1959. That year, the Toledo Blade ran a six part series by Rossmeisl in which he describes his escape, his new life in Chicago and his eventual surrender.