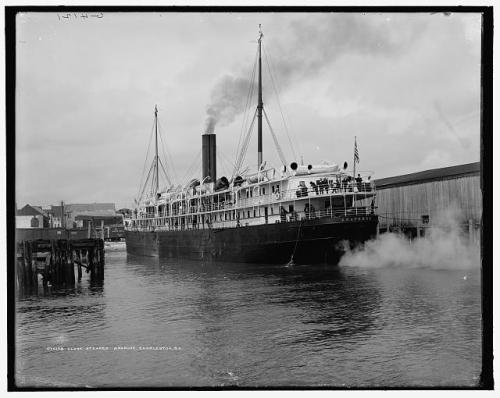 On August 11, 1909, off the coast of Cape Hatteras, telegraph operator Theodore Haubner called for help from the steamship, S. S. Arapahoe. He was momentarily confused because a new telegraph code “SOS” had recently been ratified by the Berlin Radiotelegraphic Conference to replace the old “CQD”, and he wondered which signal he should send. He sent both.

Haubner’s transmission was the first recorded American use of “SOS” to call for help.

The letters “SOS” themselves do not stand for anything. Their representation as three dots, three dashes, and three dots was distinctive and easy to relay on the telegraph. Just as with “CQD,” which meant “calling all stations-distress,” the code indicated that radio traffic should cease until the emergency is over but, if possible, those on the receiving end should answer the distress signal.

The disabled S. S. Arapahoe was rescued when the signal was heard by the wireless station at Hatteras. Only a few months later, Haubner, the telegraph operator, received an “SOS” from the S. S. Iroquois making him the first American radio operator to both send and receive a distress call.

Visit: The North Carolina Maritime Museum System, with branches in Beaufort, Hatteras and Southport, interprets our state’s maritime history, telling stories like these.