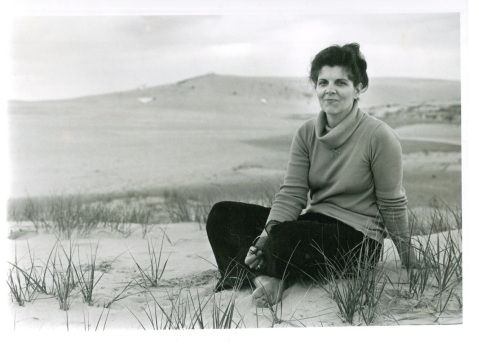 On August 15, 1973, Carolista Fletcher Baum placed herself in the path of a bulldozer removing sand from Jockey’s Ridge and refused to move. The driver cut off the engine and talked with Baum, who, after some time, left the dune unscathed. When the operator left, Baum took the distributor cap so the machine would not start.

Baum received word of the bulldozer from her three children who long had climbed the dune for the spectacular views it offered.

Though local groups had talked about protecting the large dune from encroaching development for years, Baum was the driving force that made the idea a reality. She helped form the People to People to Preserve Jockey’s Ridge after her dramatic protest, raising money and organizing petition drives to capture the attention of state and local lawmakers.

She even drove to Raleigh every day for three weeks to keep the dune in the minds of legislators.

In 1973, the Division of Parks and Recreation issued a report in favor of preserving Jockey’s Ridge as a state park, and a year later the dune was declared a National Natural Landmark. When the General Assembly appropriated funds to create the park in 1975, the preservation of the dune was secured for generations to come.

Visit: Like all other state parks, Jockey’s Ridge State Park is open to the public every day of the year except for Christmas Day.