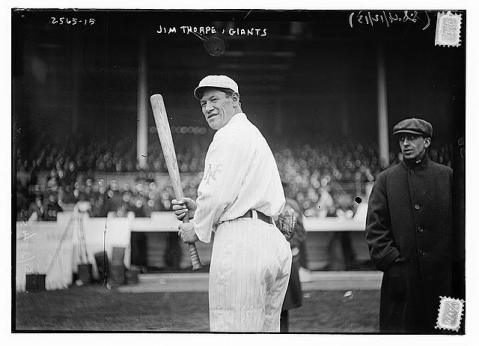 On October 13, 1982, Jim Thorpe’s medals from the 1912 Olympics were reinstated.  The famed athlete, who lived from 1888 until 1953, was born in a cabin on an Indian reservation in Oklahoma and was educated at Indian boarding schools nearby. In 1904, he enrolled at the U. S. Indian Industrial School in Carlisle, Pennsylvania. While at Carlisle, Thorpe was coached by Glenn “Pop” Warner, who added him to the track team. Recognizing his talent as an athlete, Warner suggested that Thorpe train for the 1912 Olympic Games.

In 1909, he played semi-professional baseball in North Carolina for the Rocky Mount Railroaders and the Fayetteville Highlanders.

At the 1912 Olympics in Stockholm, Sweden, Thorpe won gold medals in the newly-created multi-events, the pentathlon and the decathlon. Sweden’s King Gustav V called him “the greatest athlete in the world.” A year later, after word spread that Thorpe had played semipro baseball in North Carolina, he lost his amateur status and he was forced to return his Olympic medals.

In 1982, nearly 30 years after his death, the International Olympic Committee unanimously restored Thorpe’s Olympic medals. Thorpe is the subject of a highway historical marker in Nash County.