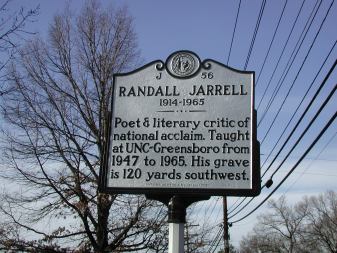 On October 14, 1965, poet Randall Jarrell was struck and killed by a car while walking at dusk along the side of NC 54 Bypass. At the time, Jarrell was staying in the hospital in Chapel Hill recovering from a suicide attempt and being treated with antidepressants. Jarrell left behind nine volumes of poetry, four books of literary criticism, four children’s books, five anthologies, a novel and a reputation as a brilliant, if troubled, writer.

Born in 1914 in Nashville, Tenn., Jarrell attended Vanderbilt University where he captained the tennis team and studied under Robert Penn Warren. Hoping to become a pilot, Jarrell entered the Army Air Force in 1942.  He failed to qualify and served as a celestial navigation instructor for the remainder of the war.  From that experience came Jarrell’s best known poem, “The Death of the Ball Turret Gunner,” ending with the line “When I died they washed me out of the turret with a hose.”

In the fall of 1947 Jarrell began teaching at what is now UNC-Greensboro, where he would live and work for the remainder of his life.