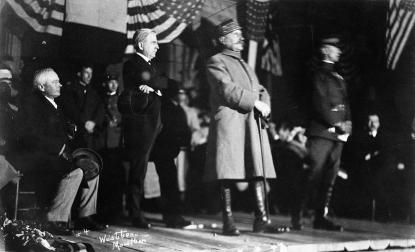 On December 9, 1921, Ferdinand Foch, formerly the commander-in-chief of all allied armies in World War I, gave a speech at the Union County Courthouse praising America’s role in the conflict. He was joined by Gov. Cameron Morrison and former Gov. Thomas Bickett.

A month earlier, Foch, who was on a speaking tour of the United States, helped Vice President Calvin Coolidge break ground on the Liberty Memorial in Kansas City. The memorial honors the fallen soldiers of World War I from Kansas and Missouri, and now houses the National World War I Museum.

Foch, already in his early 60s at the outbreak of World War I, was a career military man in the French army and a veteran of the Franco-Prussian War. By 1914, he was commander of a French corps, and in four years, he rose to command all allied armies, including those of America and Britain. Angered by what he perceived as lenient punishments and restrictions on Germany at the Treaty of Versailles, Foch reportedly exclaimed, “This is not a peace. It is an armistice for twenty years!”

Foch returned to Europe in 1922, and died nine years later. He is interred in Paris at the building known as “Les Invalides” next to Napoleon Bonaparte’s tomb.