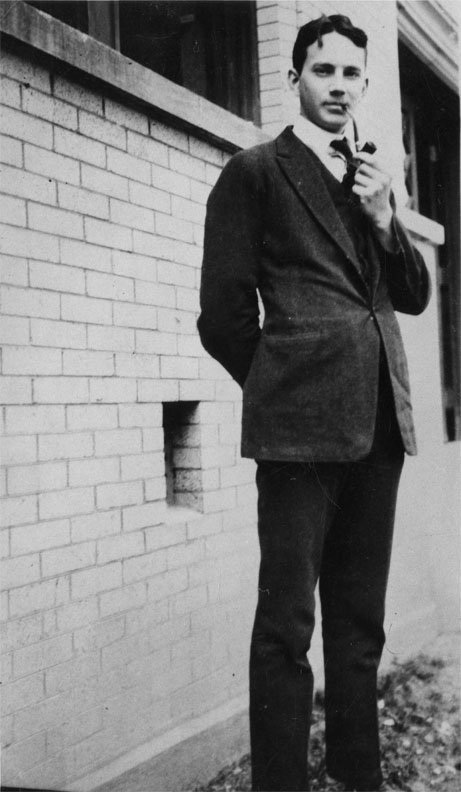 Cherished native son Thomas Wolfe was a sixteen-year-old freshman at the University of North Carolina when the United States entered the war. The campus was quickly swept by military fever, and students jumped at every opportunity for military training available to them. Those of age enlisted outright or attended formal training at military encampments, leaving younger ones, like Wolfe, to sulkily take part in campus-based training exercises.

During Wolfe’s sophomore year, war preparations on campus ramped up, and the establishment of a military battalion on campus resulted in the formation of the student body into four companies. Wolfe was assigned to Company C. Each week the boys gathered for drill instruction, using Civil War-era carbines as stand-ins for modern rifles. They were also expected to attend at least five hours of military-themed lectures each week. “They’re giving us blazes in this military stuff,” wrote Tom to his brother Ben in February 1918. “Military engineering, bomb throwing, trench warfare, bayonet fighting are a few of the things we are doing.”

Against the backdrop of this khaki-clad existence, Wolfe began finding his voice as a writer. In late 1917, he started contributing to the University of North Carolina Magazine, mostly war-themed poems oozing with a patriotic fervor that resonated with citizens throughout the state. Newspapers as far away as Florida reprinted Wolfe’s work, his first true taste of authorial success. Assistant editorships with the Tar Heel, the school newspaper, and the Yackety Yack, the school annual, and appointment as the class poet followed. Wolfe was riding high.

In the summer of 1918, he opted not to return home to Asheville but to venture to Norfolk, Virginia, where an abundance of war-time military contracts held the promise of paying jobs for unskilled laborers. Wolfe bounced from gig to gig before returning to Chapel Hill for the fall session in late September. He was barely settled when news from Asheville called him home.

The outbreak of the Spanish Flu, a virulent strain of influenza that swept the planet in an unparalleled pandemic in 1918-1919, reached the Land of the Sky that fall. Tom’s brother Ben, who had been rejected by military medical officials on account of weak lungs, had contracted the deadly illness. By the time Tom reached home, Ben was “drowning…in his own secretions,” according to a doctor. Ben’s death on October 19 nearly destroyed Tom. It was a loss he grappled with the rest of his life.

Tom’s desire to join the throngs of uniformed young men was again thwarted when he was deemed still too young to join even the Student Army Training Corps. Two months later, the war came to a sudden end. Tom went on to graduate from UNC and pursued, for a time, the life of a playwright before finally turning to fiction. In his first novel, the semi-autobiographical Look Homeward, Angel published in 1929, he returned to the scene of Ben’s death, perhaps in an attempt to work through his grief:

“The rattling in the wasted body, which seemed for hours to have given over to death all of life that is worth saving, had now ceased. The body appeared to grow rigid before them.” Ben breathed one more gasp of breath, opening his eyes and rising off his pillow, to the astonishment of Tom and his family, before passing “instantly, scornful and unafraid, as he had lived, into the shades of death.”

Interested in learning a little more about Thomas Wolfe? Consider paying a visit to Wolfe's boyhood home in Asheville, now a state historic site called the Thomas Wolfe Memorial. If you have or know of a youngster who is an avid reader you might also consider picking up a copy of our recently released young-adults biography The Life and Times of Asheville’s Thomas Wolfe by Jennifer S. Prince.