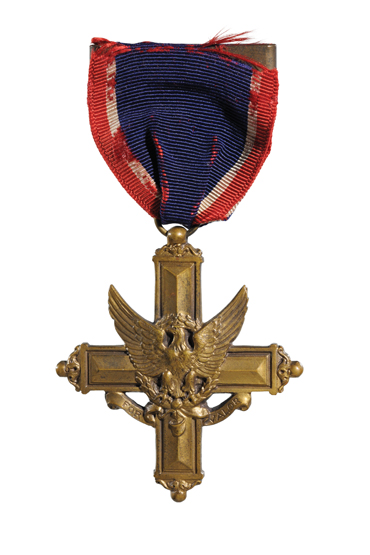 The Distinguished Service Cross (DSC) is the second highest decoration for those serving in the United States Army, behind only the Medal of Honor. Designed by Lt. Aymar E. Embury, the DSC is awarded in recognition of conspicuous heroism during combat and is equivalent to the Navy Cross and Air Force Cross.

On August 2, 1918, Corp. Robert Marshall Teachey volunteered to accompany an officer on a mission to destroy an enemy pillbox near Ypres, Belgium. For exhibiting “extraordinary heroism,” the Raleigh native received this Distinguished Service Cross.

He served with Company B of the 120th Infantry until the American offensive on the Hindenburg Line on September 29. The doughboys triumphed and broke the line, turning the tide of the war, but the assault proved to be the state’s deadliest day. Teachey lost his life in the fight. He was just nineteen.