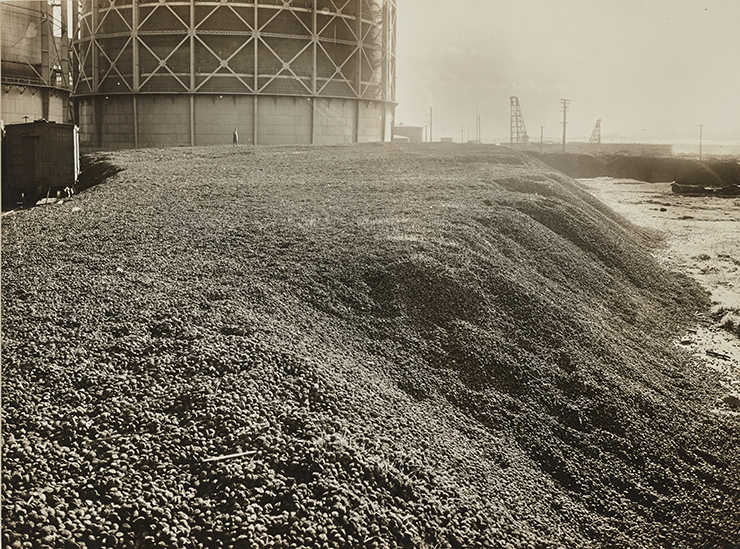 Our modern-day pursuit of increased and improved conservation practices pales in comparison to those of our ancestors of one hundred years ago. World War I placed on the citizens of this nation several burdens, forcing each to shoulder their share of the weight. As the country’s sons, fathers, and husbands scratched and clawed their way to victory on the battlefield, those remaining at home fought a war of a different kind. For civilians, the Great War was a war of supply and demand, and the entire nation rallied behind conservation efforts that are unparalleled in modern society.

Americans on the homefront pursued conservation practices in every aspect of life. Women supplemented the national food supply by planting and harvesting war gardens, a precursor to the victory gardens that popped up throughout the state and nation during the Second World War. They used substitutions for ingredients in their recipes that were desperately needed on the front, such as flour, sugar, and meat. Citizens adopted Meatless Mondays and Wheatless Wednesdays and signed pledges promising to never waste food.

Conservation organizations collected scrap metal, paper, and even rags. Fuels like coal, gas, and wood were used more thoughtfully. In fact, the state’s Council of Defense went to so far as to ask that motorists abandon “Sunday driving,” or joyriding, in order to conserve gasoline. “Public opinion was so thoroughly in accord with this appeal,” the council later reported, “that Sunday joy riding lost its pleasure….” Those who did not comply faced public scrutiny and peer pressure. 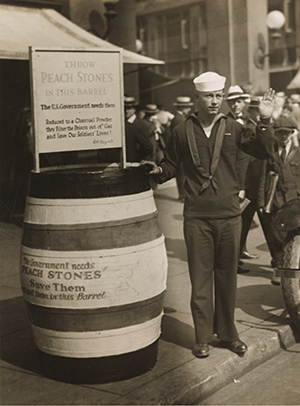 But peach pits? Where do those fit in to all of this?

The introduction of chemical warfare by the Germans in April 1915 necessitated the addition of one key piece of gear to a soldier’s outfitting: the gas mask. Design varied greatly, but most American soldiers carried the Model 1917, which consisted of several components: a series of straps for securing it to the head, a rubberized-cloth face mask, two clear lenses for the eyes, a nose clip, and a mouth piece. The mouthpiece was connected to a metal filter by a hose. What was inside the filter you ask? Peach pits, of course! And some other stuff too.

In September 1918, the United States government called on citizens to dry and gather the “seeds or pits of peaches, apricots, plums, cherries, and prunes” as well as hickory nuts, walnuts, and butternuts. The campaign targeted school children especially, providing even the youngest of Americans an opportunity to support the war effort. Newspaper ads informed the public of the details: “Poison gas…stings, blinds, and kills. Charcoal or carbon made from fruit pits and nut shells is used to neutralize it.” Two hundred peach pits or seven pounds of nuts provided enough carbon for one filter.

Collection sites sprang up throughout the state in towns both large and small. Volunteer organizations in Wilmington, Winston-Salem, Warrenton, and Reidsville, to name a few, all spearheaded efforts to collect pits and nuts. Asheville residents wholeheartedly embraced the cause, filling a large barrel placed in front of the Bon Marche three times in as many weeks.

More than one hundred carloads of material, collected through civilian efforts, were received by the Chemical Warfare Service by the time of the Armistice on November 11, 1918. The collection of fruit pits and nuts was then quickly abandoned as peace swept the globe, relegating the practice to an interesting footnote in the history of the Great War.