In mid-July 1917, the national “selective draft” drew the names of 9.6 million American men between the ages of 18 and 25 drawn from a large glass bowl, and 2,139 of those men resided in Randolph County. More than fifteen hundred went on to serve on active duty in World War I, at a time when women were allowed no closer to combat than an aid station or hospital. Every man was expected to do his duty for Uncle Sam, but what was expected of the other half of the population?

The Council of National Defense began planning for war operations in August 1916, with branches in every state. It was not until June 1917 that a “Women’s Committee” of the Council was formed in North Carolina, and at least one historian has called it “among the weakest in the Union.” While many rural women saw their wartime roles in “conventional and limited terms,” the leaders of the Women’s Committee saw the war as an opportunity to broaden the participation of women in areas where women historically had played little part.

Mary Petty, the chairman of the Randolph County Women’s Committee, spoke at the county courthouse on July 12, 1917, and defined “women’s war work” for the local newspaper. The primary object of existing women’s organizations such as the Home Demonstration Clubs and federated Women’s Clubs was “to coordinate…to enlist at once the greatest possible number [of men] in the service which the national crisis demands.” In other words, the primary duty of American women was to encourage American men to volunteer for the Army.

After that, however, the possibilities broadened, and Petty called upon women to undertake a variety of causes. Women should engage in food production, conservation and war relief (using the least amount of wheat was a national priority, so flour could be shipped to the war zone). Women should engage in social services and protect child health and welfare. Women should participate in medical service and with the Red Cross. Women should take training classes and courses of instruction “to prepare them to fill positions vacated by men in clerical, mechanical and industrial pursuits,” and then they should “protect” those women workers from exploitation in regard to “wages, child welfare, hours and conditions.” And finally, they should participate in publicity activities and “education propaganda” to spread information about women’s war work.

In Randolph County, the Home Demonstration Club and the local Red Cross chapter were the two existing organizations which blossomed during the war, with both building enough support to gradually increase operations after the war’s end. The Asheboro Women’s Club, begun in 1899 and affiliated with the state organization in 1911, worked closely with the Red Cross. 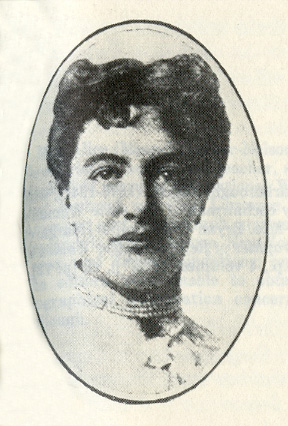 Julia Anne Thorns (1864-1939) was a charter member of the Asheboro club, and it was as a “clubwoman” that she assumed a high-profile statewide leadership role during the war years. Born in Brooklyn, New York, she moved to Randolph County when her father acquired an ownership interest in the Scarlett Copper Mine in Asheboro. While the mine was a bust, Frederick Thorns became a successful real estate broker, and two of his three daughters married and raised families in the county.

After her mother’s death in 1906, Julia inherited 350 acres of worn-out land several miles south of Asheboro, between Little River and the “Mac Lewallen Road.” Possessed by the Rooseveltian gospel of conservation, Miss Thorns called upon the State Forester to come to Asheboro and tell her what she should do to make use of her scrub forest. Though his suggestions were rather unhelpful (‘keep fire off the tract’), the interaction inspired Thorns to become more involved with environmental conservation and forestry activities. She was recognized as “an authority on the subjects of birds and trees,” and as Chair of the Conservation Committee of the Federation of North Carolina Women’s Clubs, she travelled the state speaking on subjects such as “How Can the Women Aid in the Forestry Work?” In February 1917, the North Carolina Forestry Association took the unusual step of installing her in a newly-created office, “Vice-President at Large,” and a year later at its annual meeting in Wilmington, she was elected as the first women President of the group.

Thorns’ war work also involved her directly with the state Council of Defense, where she not only served as Seventh Congressional District chairman of the Women’s Committee, but as the group’s statewide Publicity Chairman. In mid-1918, Thorns became the Executive Secretary of the Women’s Committee and was “given a desk in the office of the men’s state Council of Defense.” Her “Educational Propaganda” activities involved coordinating patriotic public speaking by high school girls and women throughout the state. Thorns set a personal example not only by promoting forestry and conservation activities but in speaking on behalf of the Red Cross and for the sale of War Bonds.

After the war Julia Thorns continued her work as Conservation Chair of the NC Federation of Women’s Clubs and again served as Vice President of the NC Forestry Association. She passed away just as the state began gearing up for the next world war and was buried with her family in Asheboro.