UNC Football and the War

The last football game I attended in person was way back in high school. Though I wasn’t (and still am not) much of a fan of the sport, I can still vividly remember the warmth of cheap hot chocolate in my hands; the coolness of the metal bleachers on a crisp fall night; the muffled calls just before the snap of the ball; the crescendoing cheer of the crowd as your team breaks free and runs the field; the call of “touchdown!” cracking through the surrounding darkness like a whip. It was exciting. It still is.

As a historian, one of the things I find most interesting about football is how little this experience has changed over the years. Many of the sights and sounds found on the field today could no doubt be found at Richmond’s Broad Street Park on November 30, 1916, when the University of North Carolina and the University of Virginia squared off in their annual Thanksgiving Classic. It was just one game in a series that dates back to 1892, a series known to the UNC and UVA faithful as the South’s Oldest Rivalry. 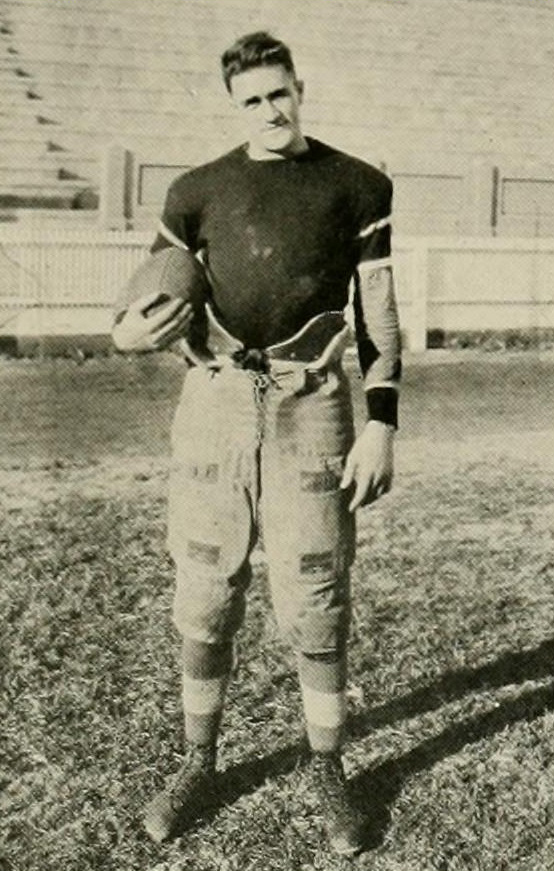 For eight consecutive match-ups, from 1907 to 1915, Virginia’s varsity squad pummeled the North Carolinians, sending the blue-and-white-clad boys home with the metallic taste of defeat in their mouths. In fact, Virginia led the overall series 17 to 4, including an embarrassing 66-0 shellacking in 1912 that haunted UNC fans and players alike for years.

But 1916 proved different. In Richmond, a 0-0 score held until the middle of the third. In front of a crowd of fifteen thousand, Quarterback Macon Williams lobbed the ball to Augustine Folger, who ran 52 yards for a touchdown. A successful field goal followed. Carolina’s defense kicked into high gear and kept their rivals off the scoreboard for the remainder of the game, resulting in a 7-0 victory.

When the clock finally ran down, fans rushed the field, threw their heroes on their shoulders, and carried them off under a cacophony of cheers. That night, as the team celebrated the triumphant conclusion of their season over dinner, none of them could have guessed that in just five short months, a pall of olive drab would descend upon the carefree days of football, classes, and social gatherings. Athletic fields were soon turned over to the Student Army Training Corps to be used as drill and training fields. The school would not field a varsity team until the 1919 season.

In 1917 and 1918, all but two who took the field for the 1916 Thanksgiving Classic traded in their jerseys and cleats for tunics and boots. They served as officers and enlisted men in artillery, infantry, aviation, and hospital units. Fortunately, none were killed, but a few were injured, and one, Hargrove Bellamy, was captured by German forces. All returned home and did their best to pick up where they had left off before the war. A synopsis of each man’s wartime service and experience is found below. The position they played during the Classic is provided next to their name. 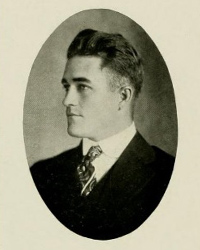 The hero of the 1916 Thanksgiving Classic, the man who ran 52 yards for the sole score of the game, entered into the war era with extensive military training. Bill Folger was a 1915 graduate of the Citadel and a captain in the United States Reserves. In the summer of 1917, he attended a reserve officer’s training camp at Fort Oglethorpe, Georgia, before reporting to the 321st Infantry Regiment to serve as captain of Company D. Old football injuries continued to nag him, however, and a bad knee knocked him out of overseas service. With tears in his eyes, he watched as his company departed for Europe without him. Sometime in May or June of 1918, he was discharged from the service. 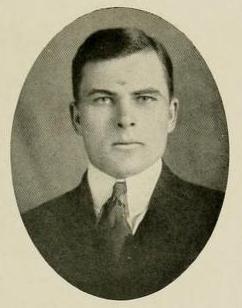 Macon McCorkle Williams, quarterback
Quarterback Macon Williams was a native of Newton, North Carolina, and the youngest of four brothers to take the field in blue and white. Following graduation, the young man joined the army, attended officer’s training at Fort Oglethorpe, and was commissioned as a second lieutenant. He at first reported to the 317th Field Artillery but was soon transferred to Oklahoma for flight training, which he passed with ease. Despite possession of the prized aviator’s wings, Williams spent his entire overseas deployment with the 307th Field Artillery. The former quarterback miraculously survived two separate airplane crashes and returned safely home in May 1919. 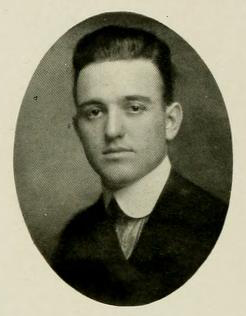 Team captain and center George “Yank” Tandy, of Jacksonville, Illinois, was one of only two on the 1916 Thanksgiving Classic roster who didn’t serve in the military during the war period. In June 1917, Tandy registered for the draft in Durham, North Carolina, where he was managing the A. E. Lloyd Hardware Company. Despite his lack of military service, Tandy found other ways to support the war effort, including volunteering with the War Camp Community Service, organizing and leading a rifle club, and running for local public office. He was called up in mid-October 1918 but a bout with the flu during the influenza epidemic and the signing of the armistice just three weeks later kept him out of uniform. 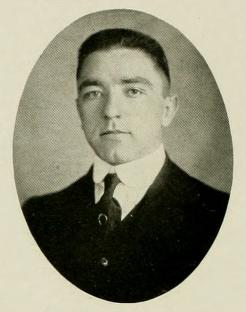 George Raby Tennent, right halfback
Asheville’s Raby Tennent registered for the draft in June 1917 but did not serve in any branch of the United States armed forces during the war. Upon graduation, the chemist took a job with the E. I. DuPont de Nemours & Company in Hopewell, Virginia—a facility that manufactured munitions in support of the Allied war effort—and appears to have remained there for the entirety of the war. A December 1917 newspaper article stated that he was en route to join the aviation corps, but no record of such service can be found. Given his prior military experience—he had served for five years with the North Carolina National Guard—it is possible that he developed some kind of medical condition that had kept him out of uniform during the crisis. 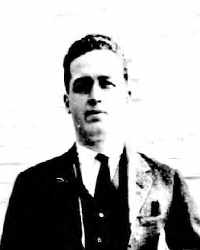 Wilmington native Hargrove Bellamy was one of three sophomores to take the field against Virginia that Thanksgiving Day, but the twenty-year-old did not let his youth impede him on the field. Bellamy’s indomitable spirit carried him through a harrowing ordeal when, as a member of the 119th Infantry Regiment, he was severely wounded and captured by German forces during the September 29, 1918, charge on the Hindenburg Line—an assault that would turn out to be the state’s deadliest of the war. For his perseverance in that fight to break the line, Bellamy was awarded the Distinguished Service Cross. 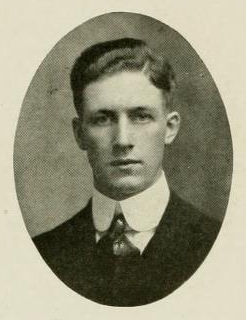 James Graham Ramsey, right end
Graham Ramsey, of Salisbury, was a year into medical school at UNC when war intervened to put his life on a new track. In the summer of 1917, he joined a number of fellow students to attend officers’ training at Fort Oglethorpe and was then commissioned a second lieutenant and assigned to the 371st Infantry, an African American regiment of the 93rd Division. [Because very few black men were permitted to attend officer’s training, all-black regiments still had a tendency to be officered by white men at this time.] Lieutenant Ramsey saw combat in the Verdun and Champaign sectors of France and was wounded in the leg on September 28, 1918. For continuing to lead his men in the assault despite his wounds, Ramsey received the French Croix de Guerre and was twice cited for the Distinguished Service Cross. 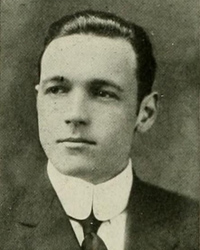 Frank Love joined the Enlisted Reserve Corps in June 1917 and was assigned to Hospital Unit O, also known as the Brenizer Unit in honor of the gentleman who organized the group, Dr. Addison G. Brenizer, of Charlotte. Upon arrival in France, Love’s unit was consolidated with other hospital units to form Base Hospital #6 stationed in Bordeaux, reportedly the largest base hospital in France. For a little more than a year, the unit oversaw the care of close to 24,000 patients. Love returned to the United States in March 1919 and received an honorable discharge the following month. 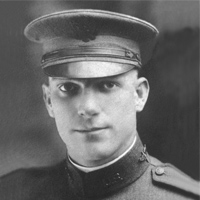 Ralph Paul Currie, right tackle
Candor native Ralph Currie graduated with class number 50 of the Austin, Texas based School of Military Aeronautics in June 1918 with the rank of second lieutenant. The majority of his military service was based at Ellington Field in Texas as a member of the Air Service Military Aeronautics. Lieutenant Currie remained in active service until honorably discharged in June 1919 but was subsequently accepted as a reserve aviator. His wartime military portrait appears here courtesy Sue Currie via findagrave.com. 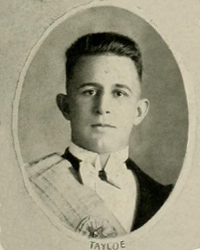 Early in the 1916 season, it was thought that Washington (N.C.) native John Tayloe would have to abandon his position on the football team in order to pursue his medical studies more aggressively. Ultimately, the young man was pressured by the student body to make it work and took the field with his teammates for the Thanksgiving classic. Tayloe entered the army from civilian life with the rank of second lieutenant and was assigned to the 371st Infantry with teammate Graham Ramsey. During his year-long overseas deployment, Tayloe saw action in around Verdun and Champagne and was honorably discharged in May 1919. 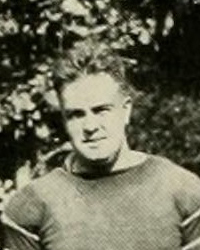 William Grimes, right guard
At twenty years of age, Raleigh-born William Grimes joined the North Carolina National Guard as a corporal in September 1917. When the state’s Guard forces were federalized, Grimes’s unit was reorganized as the 113th Field Artillery, an artillery unit attached to the 30th Division. During his ten month stint overseas, Grimes served in the headquarters company as a telephone operator and saw action in the Argonne, St. Mihiel, and Toul sectors of France. He was honorably discharged with the rank of sergeant in March 1919. 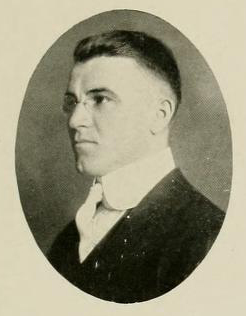 Beemer Clifford Harrell, left guard
Marshville native Beemer Harrell gave up his position of principal at a high school in Shelby in order to enlist in March 1918. Though he was formally assigned to the 156th Depot Brigade upon enlistment, Harrell was quickly transferred to the medical department and assigned to the base hospital at Camp Jackson, South Carolina. During the height of the influenza epidemic, Sergeant Harrell fell seriously ill—so ill, in fact, that he was mistakenly reported deceased at one point—but the young man rallied and made a miraculous recovery. He received an honorable discharge in August 1919.

Earl Johnson, replacement quarterback
Rising junior Earl Johnson, the son of Raleigh mayor James Johnson, joined the North Carolina National Guard in September 1917 and was assigned to the 113th Field Artillery. Johnson served alongside fellow teammate and classmate William Grimes in the headquarters company and saw service in the same sectors of France. While in St. Mihiel, Sergeant Johnson was wounded in the forehead by a piece of shrapnel from an enemy shell that exploded in the vicinity of his squad’s position. Miraculously, Johnson walked away from the hit and did not even need to seek medical care at a hospital facility. He was honorably discharged in March 1919, following ten months of overseas service. 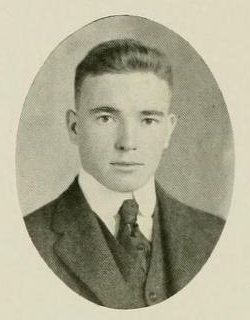 James Coleman, known popularly as “Nemo,” was a long-time Asheville resident and good friend to writer Thomas Wolfe. Coleman’s original connection with UNC football came when he volunteered as team manager. By his senior year, however, he had worked his way onto the roster and was on the field for the 1916 Thanksgiving Day Classic. Like so many of his classmates, he joined the army in the summer of 1917, attended officer’s training at Fort Oglethorpe, and received a commission as second lieutenant. Lieutenant Coleman served overseas for eleven months with the 322nd Infantry, returned home in June 1919, and was honorably discharged the following month.